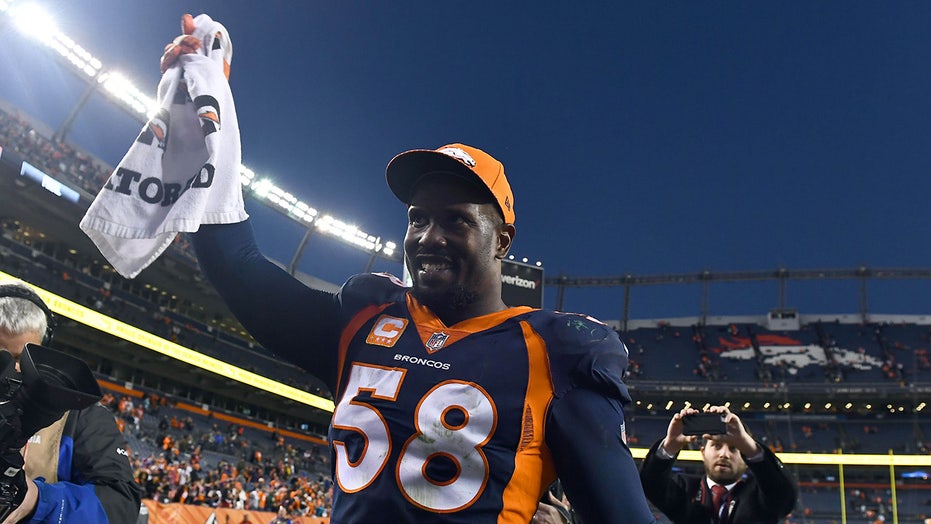 Denver Broncos star Von Miller, who deals with asthma, says that he couldn’t count the times when he said he couldn’t breathe. But when he’d ask his mother or father for help, someone was there for him every single time.

Miller couldn’t imagine was it was like to be George Floyd, the Minneapolis man who died in police custody May 25 after an officer kneeled on his neck for more than eight minutes in a moment caught on cellphone video.

CARDINALS' LARRY FITZGERALD ON GEORGE FLOYD ANGER: 'THE FIRST STEP MUST BE TO LISTEN TO ONE ANOTHER'

Since Floyd’s death, Miller says that “tears have overcome me at least once a day.” And he says that he has felt this pain before as far back as he can remember, which started with being called the "n-word" in elementary school. Miller calls it an “emotional pain” and “a physical pain,” but he says “it is the pain of oppression in a country that’s supposed to be free.”

“I have been so blessed. I grew up in the Dallas area in a loving, middle-class home, with my brother and both of our parents. They provided for us, protected us, taught us and loved us, but they couldn’t protect us from the ugliness and sheer pervasiveness of racism,” Miller wrote in an essay that appeared on Time.com. “It’s everywhere and utterly unavoidable. After the world introduced me to racism while I attended elementary school, I encountered it again from a high school football coach. I had to engage it several times in college — on and off campus. And now, despite living my childhood dream of playing in the NFL, I continue to experience the constant nightmare of racism.

“I donated a police vehicle to my hometown in 2016, but when I chose to take a knee for a single game in 2017 during the national anthem to protest racial inequality and police brutality, I received hate mail and lost endorsements,” Miler added.

Miller says that it’s great that the NFL made an official statement in support of Black Lives Matter and he’s behind the right to peacefully protest, but he said it will be up to NFL team owners to put a policy into action and “walk the walk.”

“I have achieved celebrity, earned great wealth, reached the pinnacle of my profession, and, yet, I am George Floyd. I am Ahmaud Arbery. I am Tamir Rice. I am Eric Garner. I am Philando Castile. I am Alton Sterling. I am Oscar Grant. I am Trayvon Martin. I am Emmett Till,” Miller wrote.

“I am not a football player named Von Miller. I am Von Miller — a strong, proud, African-American who loves making kids smile, people laugh and my parents shake their heads,” Miller said. “I also just happen to play football, which has given me a platform. My love for our country compels me to use it. My message is this: I am all in for unity, equality and justice. If you are committed to that, we can ride together. Let’s goooo!”