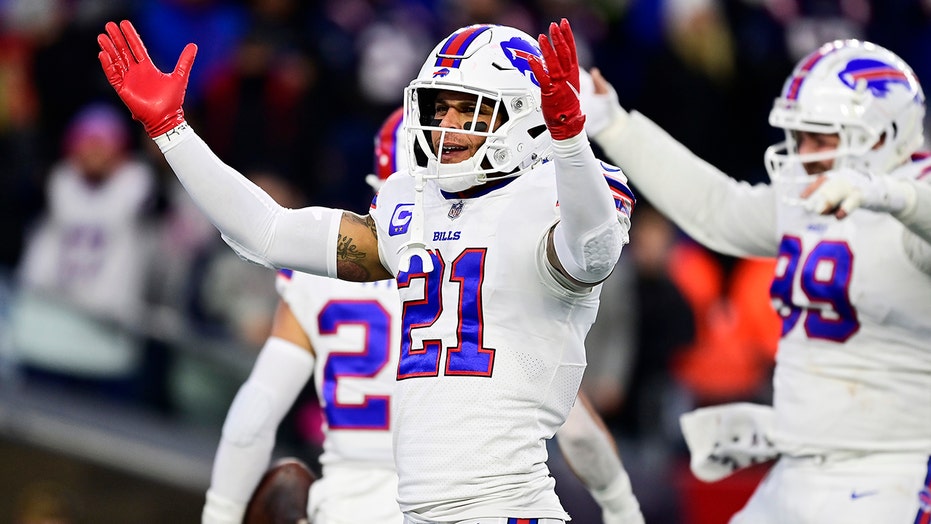 Buffalo Bills safety Jordan Poyer was elated after the team’s 33-21 victory over the New England Patriots on Sunday after losing to them about three weeks ago in icy conditions.

Poyer’s first reaction wasn’t about beating the Patriots. It was about shoving the win into sports columnist Jerry Sullivan’s face.

Jordan Poyer (21) of the Buffalo Bills reacts after the defense forces a turnover by the New England Patriots during the fourth quarter at Gillette Stadium on Dec. 26, 2021, in Foxborough, Massachusetts. (Maddie Malhotra/Getty Images)

"Where that Jerry Sullivan at? What the f—k’s he got to say?" Poyer was heard yelling on the way back to the locker room, according to The Athletic.

Poyer had three tackles and a tackle for a loss in the win.

Sullivan saw the tweet and reminded his followers he doesn’t travel for Bills road games.

"I guess he hasn't noticed that I haven't covered a road game since 2017. Bruce Smith did the same thing once. I've been called out by Hall of Famers. Glad to see he cares that much. He's lucky he has Allen on his side," he tweeted.

FLASHBACK: BILLS' MICAH HYDE AND JORDAN POYER SLAM REPORTER FOR ASKING IF THEY WERE 'EMBARRASSED' AFTER PATRIOTS LOSS

Earlier in the season, the Bills lost to the Patriots 14-10. Mac Jones only threw three passes as the Patriots dominated the run game in the wind and the snow that plagued the area. Sullivan asked Poyer and Micah Hyde if they were "embarrassed" after allowing 222 rushing yards in their Dec. 6 game.

Jordan Poyer of the Buffalo Bills warms up before the game against the Miami Dolphins at Highmark Stadium on Oct. 31, 2021, in Orchard Park, New York. (Timothy T Ludwig/Getty Images)

"I mean, what kind of question is that?" Poyer said as Hyde replied: "Bro, what are we doing?"

Both players then pointed to the final score to show Buffalo’s ability to limit the Patriots to just 14 points.

"We made stops when we had to. They had one big run. I mean they got good [running backs]," Poyer said. "I mean, I don’t know how you want us to answer that question."