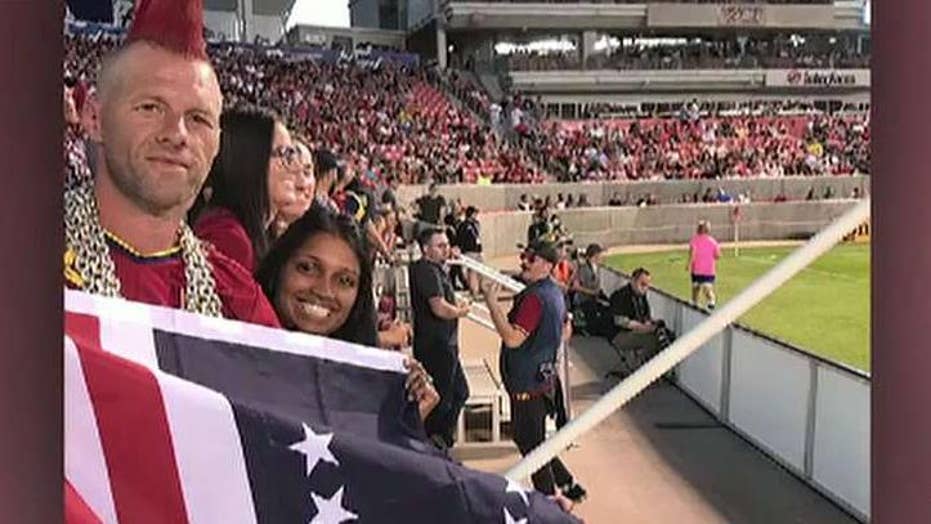 Shannon Bream says that the code of conduct for the soccer stadium leaves the judgement of whether or not a flag is appropriate up to the stadium staff.

For many Americans, the 13-star "Betsy Ross flag" is a symbol of America's victorious fight for independence from Britain.

But two die-hard soccer fans in Utah say Major League Soccer's Real Salt Lake asked them to take down a Betsy Ross flag they were waving in the front row at a recent match because the team dubbed the star-spangled banner a "symbol for hate groups."

Randolf and Diana Scott, season ticket holders who have attended every home game for the team at Rio Tinto Stadium in Sandy, Utah, came decked out in team jerseys and hats but also brought a version of the original American flag featuring 13 white stars in a circle to represent the union of the original 13 colonies.

"Diana bought it for me actually, because my other flag was kind of old and falling apart," Randolf told Salt Lake City's FOX 13.

Stadium personnel asked the couple to take the flag down or risk being asked to leave.

"They kept telling us if he wasn’t going to take it down, we were going to be rejected from the game," Diana said.

After being repeatedly asked to do so, they eventually put the flag away.

Randolf and Diana Scott at an RSL home game at Rio Tinto Stadium in Utah holding a Betsy Ross flag, before they put it away on the request of stadium personnel.

Real Salt Lake (RSL) is a part of Major League Soccer, which is sanctioned by the United States Soccer Federation. MLS has stated in its Fan Code of Conduct that "Using (including on any sign or other visible representation) political, threatening, abusive, insulting, offensive language and/or gestures, which includes racist, homophobic, xenophobic, sexist or otherwise inappropriate language or behavior" is prohibited at stadiums to preserve the safety of games.

Some critics have said the Betsy Ross flag connotes slavery and has been used by far-right groups also flying the Confederate battle flag. But others claim that interpretation is an overstatement and that the flag refers solely to the fight for independence.

Shortly before July 4, Nike pulled a new shoe that featured the Betsy Ross flag on the heel before its launch date on the advice of former San Francisco 49ers quarterback Colin Kaepernick, who said he found the shoe offensive. Kaepernick has been an outspoken advocate of the Black Lives Matter movement and started a trend of kneeling during the "Star-Spangled Banner" at NFL games to protest police killings of African-Americans.

"It just kind of bothered me that [Nike was] going to take it away," Diana said. "It’s a great flag, and I love it."

RSL said the stadium personnel's decision to ask that the flag be taken down during the game was in line with the team's belief that the symbol was too controversial to be permitted at the stadiums.

"Recently, and very controversially as well as surprising to us, the Colonial flag has been adopted as a symbol for hate groups," RSL Chief Business Officer Andy Carroll said in a statement to FOX 13. "Any controversial flags or other similar banners or signs with symbols of hatred, divisiveness and/or intolerance whether intentional or otherwise will not be permitted in our stadiums. Period.”

The Scotts said they understood the team's policy and weren't bothered by being asked to put the flag away, but were concerned more about threats of violence against Randolf on social media.

"When people see me or Diana with this flag, I hope they can understand that it’s about the freedoms we have here in America," Randolf said, "the legacy that America has."