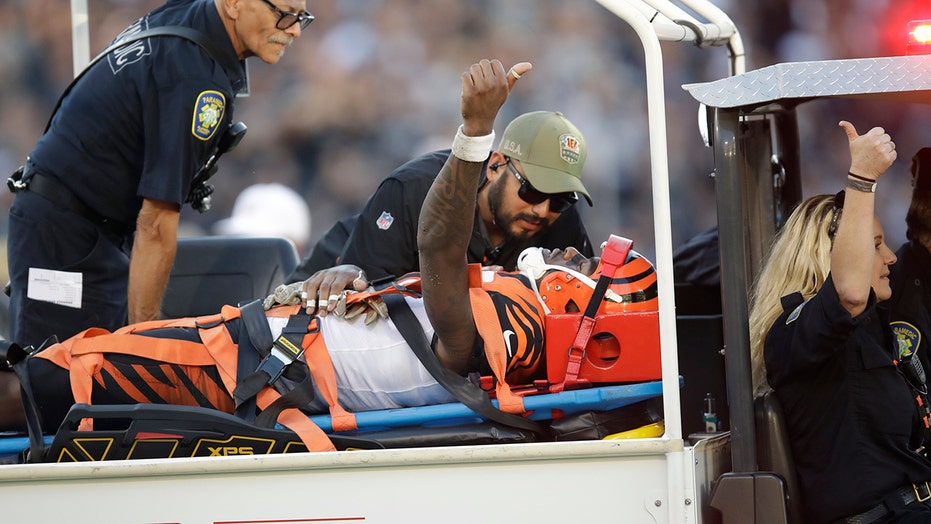 Cincinnati Bengals wide receiver Auden Tate shared an update on his status after taking a scary hit to the head during a game against the Oakland Raiders on Sunday.

Tate received a pass from Ryan Finley and he was met by Raiders safety Curtis Riley in the fourth quarter. The defensive back collided into the back of Tate, causing his head to snap forward.

Tate was carried off on a backboard but was able to give a thumbs up to the crowd on his way out.

On Monday, Tate tweeted he was “good” following the scary play.

“I’m good y’all appreciate the love and prayers,” he wrote.

Bengals coach Zac Taylor said Monday that Tate suffered a concussion and a cervical strain, according to the Cincinnati Enquirer.

“He was on the plane last night,” Taylor said. “We were able to talk to him.”

Tate is in his second season with the Bengals. Cincinnati selected Tate in the seventh round of the 2018 NFL Draft out of Florida State.

The Cincinnati Bengals look on as Bengals wide receiver Auden Tate is carried off the field after an injury during the second half of an NFL football game against the Oakland Raiders in Oakland, Calif., Sunday, Nov. 17, 2019. (AP Photo/D. Ross Cameron)

This season, Tate has caught 34 passes on 66 targets in nine games for Cincinnati this season. He also has 483 receiving yards and one touchdown catch.

The winless Bengals lost to the Raiders, 17-10.