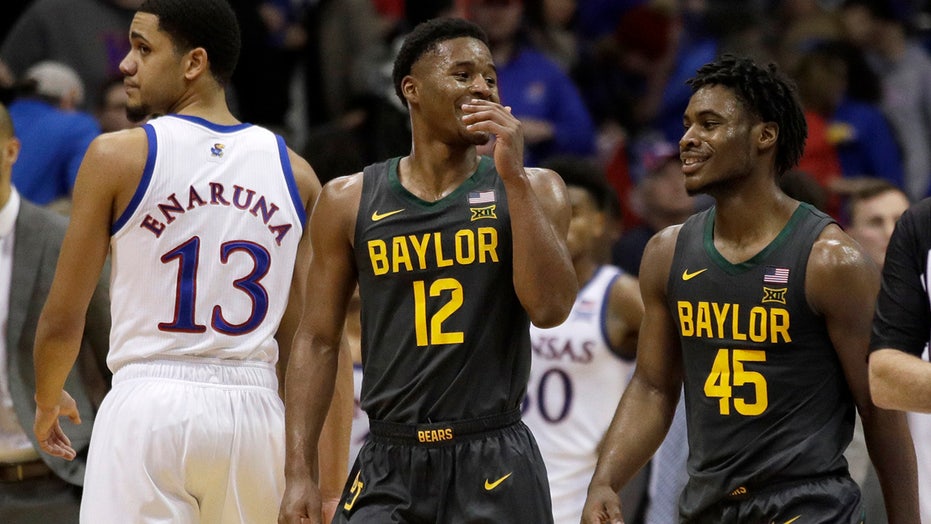 Good luck finding any team in the country that notches a better pair of road wins in the same week than Baylor, which followed up a victory at Texas Tech by invading Allen Fieldhouse and thumping Kansas on its home floor.

As a result? The Bears leapfrogged the Jayhawks and Duke into the second spot in The Associated Press men's college basketball poll on Monday. They finished with 1,567 points in voting by 65 media members who regularly cover the game, just seven back of top-ranked Gonzaga — even though Baylor had 31 first-place votes and the Bulldogs had 30.

“I think to have a special team you first need to have that work ethic, you need to have that character, but most of all you have to have guys that buy into roles and celebrate each other's success,” Bears coach Scott Drew explained. “As the year has gone on we've done better and better at that. We call it ‘playing with joy.’ If you do that, good things happen.”

Great things, as a matter of fact. Baylor (13-1, 3-0 Big 12) hasn't lost since playing Washington in Alaska in its second game of the season. Along the way, the boys from Waco, Texas, have notched nonconference wins over ranked teams Villanova, Arizona and Butler along with league wins over the Red Raiders, the Jayhawks and Texas.

The win over Kansas was the first for Baylor in 18 tries at Allen Fieldhouse and the first over a top-five team on the road.

The Blue Devils fell to third in the AP poll, followed by unbeaten Auburn and Butler. The Jayhawks were next with another unbeaten, San Diego State, staying at No. 7. Oregon, Florida State and Kentucky rounded out the top 10.

The Wildcats climbed four spots by squeezing out tougher-than-expected wins over Georgia and Alabama.

“I'm telling you, I believe in every one of these kids. I wouldn't have recruited them here. But I'll tell you, it's really hard here," Kentucky coach John Calipari said. “Every game we play is someone's Super Bowl.”

The biggest climb came from Wichita State, which jumped seven spots to No. 16 after soundly beating new No. 22 Memphis and turning back Connecticut in double overtime. The Shockers' only loss came against No. 12 West Virginia in the championship game of the Cancun Classic in late November.

“We are at 15 wins now and I don't even know when we got that last year, so the jump has been crazy," said Shockers guard Erik Stevenson, who leads the team in scoring. "National recognition is cool and all, but we feel like we've been slept on for a while now. We feel like we could beat anybody in the country.”

The biggest fall by a team that remains in the poll came from Ohio State, whichdropped two more games — to Maryland and Indiana — to make it four consecutive losses. The Buckeyes were once in the top five but are now No. 21.

“We have to find a way to figure some things out here quickly,” Ohio State coach Chris Holtmann said. "You know, I think it's a work in progress right now. I think we definitely have some offensive issues that we have to work out.”

Here are some other takeaways from the latest edition of the college basketball poll:

Ohio State wasn't the only Big Ten team to take a tumble. Michigan State dropped seven spots to No. 15 after the Spartans were pounded 71-42 at Purdue, and Penn State fell from No. 20 all the way out of the poll after the Nittany Lions lost consecutive games to unranked teams in Wisconsin and Rutgers.

Seton Hall returned to the poll at No. 18 thanks to back-to-back wins over Xavier and Marquette that ran the Pirates' record to 4-0 in the Big East. A pair of newcomers in Illinois and Creighton rounded out the Top 25, and Virginia and Arizona joined the Nittany Lions in falling out. The Cavaliers lost to Boston College and the Wildcats fell to Oregon State last week.