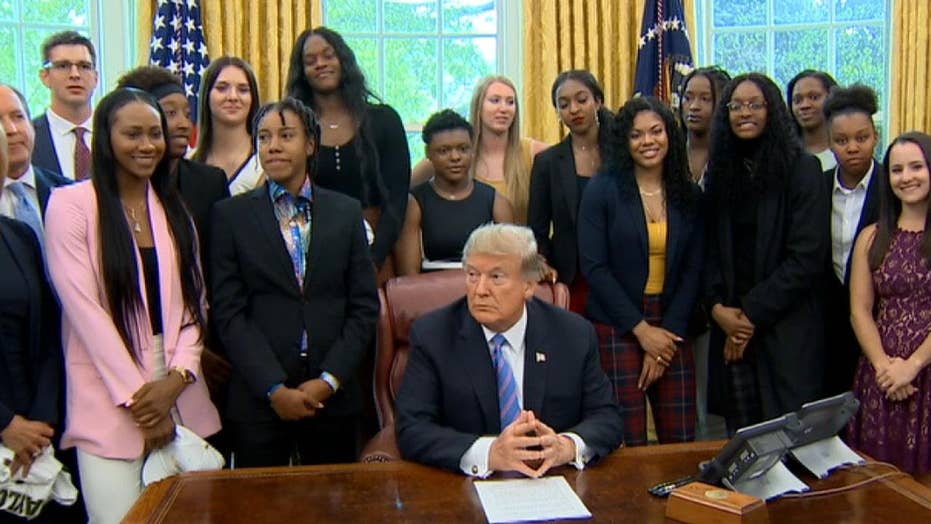 President Trump welcomed members of the Baylor University Lady Bears to the White House to celebrate their 2019 NCAA Division I Championship win.

President Trump welcomed Baylor University's Lady Bears to the White House on Monday to celebrate their 2019 NCAA Division I Championship win over burgers, fries, pizza and more, and it didn't stop top player Kalani Brown from poking fun at the food.

Brown, a Baylor senior who was drafted in the first round with the seventh overall pick during the WNBA Draft to join the Los Angeles Sparks, apparently laughed at the spread of McDonald's burgers, Chick-fil-A sandwiches, fries, pies of pizzas and platters of barbeque sauce, ketchup and condiments in an Instagram story of her visit.

"Okay, Donnie. Cool," she said as she panned the rows of food.

The group was the first women's college or professional team to visit the White House during Trump's presidency after they beat Notre Dame 82-81 in a close game earlier in April.

The Lady Bears also presented Trump with a Baylor jersey and hat and posed for group pictures with the president.

Other professional teams and athletes famously refused Trump's invitation to the White House.

The president announced last June that the Golden State Warriors would not be invited to the White House after star Stephen Curry said he was not interested in making the visit because he disagreed with Trump's stance on athletes kneeling during the national anthem.