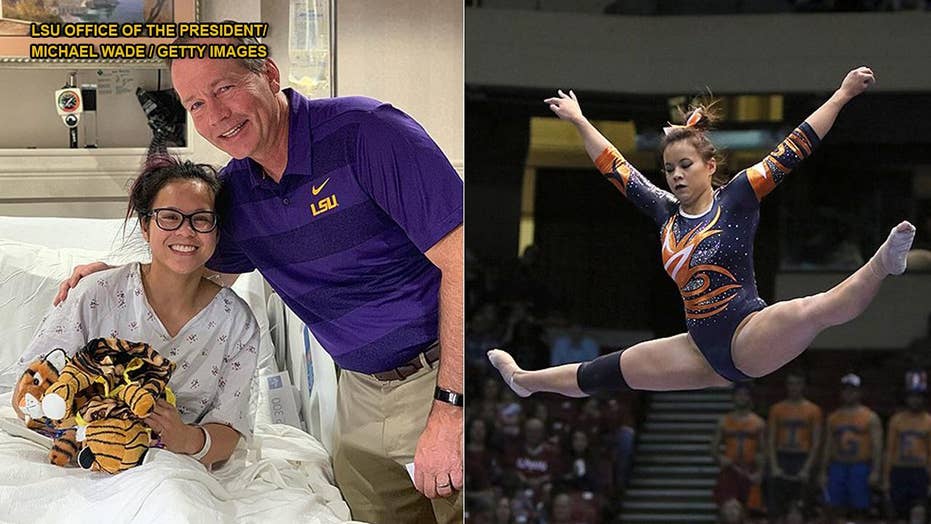 After being seriously injured during her floor routine on Friday, Auburn Tigers senior gymnast Samantha Cerio has announced she is retiring from the sport. Cerio was injured while attempting to do a handspring double front with a blind landing during the Baton Rouge Regional. She suffered two dislocated knees and 'multiple torn ligaments.' An aerospace engineering major, Cerio already has a job lined up with Boeing in Seattle.

Days after suffering a horrifying injury during an NCAA gymnastics regional event, a senior gymnast from Auburn University revealed Monday she is retiring from the sport.

Samantha Cerio was making her first pass at the Baton Rouge Regional, attempting a handspring double front with a blind landing when she made the hard landing and fell to the mat.

"It may not have ended the way I had planned, but nothing ever goes as planned," Cerio posted to Instagram.

Cerio was reportedly screaming in agony on the floor and could be seen on video clutching both her legs in pain before she was tended by medical staff and athletic trainers.

The meet was delayed while medical workers put splints on both of her legs before carrying her out of the Pete Maravich Assembly Center to a standing ovation.

Auburn coach Jeff Graba disclosed on Twitter that Cerio suffered two dislocated knees with "multiple torn ligaments" in both knees after making the blind landing. She underwent surgery on Monday afternoon, which lasted 2 1/2 hours but was an "extreme success," according to Graba.

"We know the road for full healing is going to be a long and difficult one, but we are confident that she’ll be able to make a complete recovery," he said Tuesday on Twitter.

The athlete was visited at the hospital before her surgery by Louisiana State University President F. King Alexander.

"What a wonderful, inspiring young lady. I have no doubt she will overcome this injury and go on to do amazing things," he wrote on Twitter.

Cerio, who focused on the floor and the bars, was recently named an SEC co-scholar athlete of the year, according to the Auburn Tigers website. The aerospace engineering major who graduates in May already has a job lined up with Boeing in Seattle where she will be working on rockets.

In her Instagram post announcing her retirement from the sport, Cerio said she "couldn’t be prouder of the person" that gymnastics made her become.

"It’s taught me hard work, humility, integrity, and dedication, just to name a few," she wrote. "It’s given me challenges and roadblocks that I would have never imagined that has tested who I am as a person."

The team rallied around Cerio's injury, with the hashtag "#StickItForSam" before the regional final on Saturday night but ended up coming up short, finishing fourth.

Cerio's coach, who said her injury was "pretty tough to watch," said she was "a fighter."

"We couldn't have a better leader for this team," he posted to Twitter.