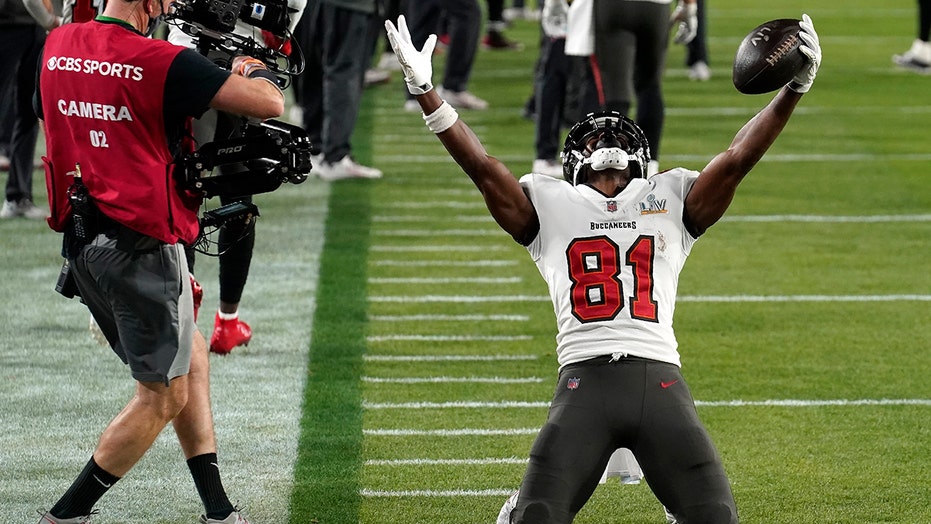 Antonio Brown is still on the Tampa Bay Buccaneers as of Monday night despite coach Bruce Arians telling reporters after the wide receiver’s meltdown that he is "no longer a Buc."

Arians was asked earlier Monday during his media availability about the logistics of cutting Brown, and he appeared to pass the buck to the front office.

"That's up to [general manager Jason Licht] and what he wants to do," Arians said when asked about how the Buccaneers will move on from Brown.

According to ESPN, the Buccaneers were talking with the NFL about how to move forward with Brown’s situation. The wide receiver is sure to face some kind of discipline from the NFL due to the outburst and leaving the stadium in the middle of the game against the New York Jets.

The Buccaneers still had Brown on their official roster.

Pro Football Talk’s Mike Florio suggested Sunday on NBC’s "Football Night in America" that a desperate-enough team trying to win the Super Bowl this season could find themselves with an opportunity to sign Brown even given how bad the chaotic scenes looked.

BUCS' BRUCE ARIANS ON ANTONIO BROWN FOLLOWING MELTDOWN: 'I DO CARE ABOUT HIM'

"The organization is very concerned about his mental health. … That’s the short-term focal point. But, if they do move forward releasing him — he passes through waivers, if he’s not claimed by another team, he becomes a free agent," Florio said.

"And it’s easy to say based on what we saw today that it’s over, it’s done, no one else is going to give him another second chance. But talent always finds a way, and there are teams out there that are trying to win playoff games and pursue Super Bowl championships, and he helped the Buccaneers get one last year. So, if whatever happened today can be explained, and it settles down, you can’t rule out another team possibly taking a chance on Antonio Brown at some point over the balance of the season."

The details surrounding the incident have yet to come out. Reports indicated that Brown was concerned about his ankle and didn’t want to play. Arians said Brown never told him he was injured and added that the two had a "conversation" and that the player left the field. Arians didn’t say what the conversation included.

Brown posted a goodbye note on Instagram and has been touting his new rap song.