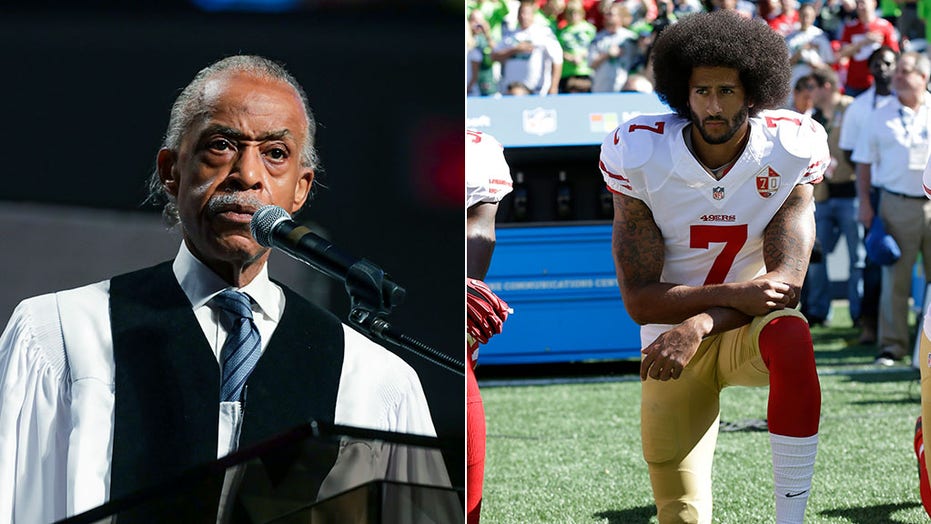 Hundreds of mourners, including the Rev. Al Sharpton, honor George Floyd at his private memorial service in Minneapolis.

Al Sharpton delivered the eulogy at George Floyd's funeral in Houston on Tuesday, and during it asked the NFL to "give Colin Kaepernick a job back."

Sharpton spoke about the NFL’s apology to its players for not listening about their concerns with racial injustice. The apology, however, never included a mention of Kaepernick, who was trying to get everyone’s attention four years ago about the issues of police brutality against minorities in our society, Sharpton pointed out.

BRONCOS' VON MILLER WRITES 'I AM ALL IN FOR UNITY, EQUALITY AND JUSTICE' FOLLOWING GEORGE FLOYD'S DEATH, PROTESTS

“The head of the NFL said, ‘Yeah, maybe we was wrong. Football players, maybe they did have the right to peacefully protest,'” he said. “Well, don’t apologize. Give Colin Kaepernick a job back. Don’t come with some empty apology. Take a man’s livelihood. Strip a man down of his talents. And four years later, when the whole world is marching, all of a sudden you go and do a FaceTime, talk about you sorry. Minimizing the value of our lives."

“You sorry? Then repay the damage you did to the career you stood down, ’cause when Colin took a knee, he took it for the families in this building,” Sharpton added. “And we don’t want an apology. We want him repaired.”

The topic of Kaepernick getting a job back in the NFL has resurfaced in the wake of Floyd's death and protests against police brutality -- something Kaepernick took a knee to protest during the national anthem four years ago.

According to ProFootballTalk, nothing has happened in regard to a potential Kaepernick return, and no teams have shown interest in seeing what he can do yet.