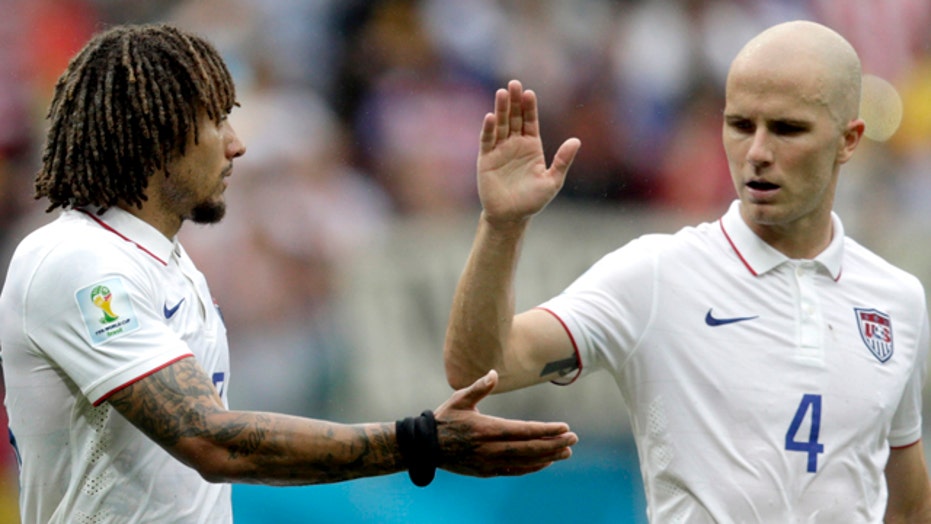 Win or go home: US soccer set to take on Belgium

While the red, white and blue saw huge crowds attend matches during group play in Natal, Manaus and Recife, the specter of early elimination in the so-called “Group of Death” threatened to send many U.S. supporters packing for home. But after a win over Ghana and a hard fought draw against Cristiano Ronaldo and Portugal, many decided they would stay in Brazil for at least a few more days.

“It’s a once in a lifetime opportunity,” Paul Robertson, a fan from Tennessee who attended all three Team USA games before booking his flight to Salvador, told Fox News Latino. “I think we’re gong to win and advance further in the tournament, and I’d hate to be so close and have to go home when I had the chance to see that happen.”

Robertson, who works in the Tennessee state legislature, was one of about 1,000 people crammed into a club in the heart of Salvador’s financial district for an event put on by U.S. Soccer.

As a saxophone player jammed along to the house music, entertaining (and confusing) the crowd on the dance floor, other party-goers congregated around tables set up on the back patio, discussing chaotic travel itineraries along with the U.S.’s chances against Belgium.

Many fans had been in Brazil since the beginning of the tournament and extended their trip to see how far the U.S. could go. Others came straight to Salvador after securing tickets to the game.

“This was spur of the moment,” said Andrew Campos, who was travelling with his younger sister, Melie. “She told me we’ve got a chance to watch the U.S. game, [our friends] have some extra tickets, it’s probably going to cost a decent amount of money, and I was like here’s my credit card number. I don’t care, let’s do it.”

Belgium has a strong team led by 23-year old Chelsea midfielder Eden Hazard, but besides two assists Hazard has been quiet this World Cup, and the Red Devil’s have seen their tournament run plagued by injuries, including possibly to Manchester City captain Vincent Kompany.

That, paired with the return from a hamstring injury of U.S. striker Jozy Altidore, has given both supporters and coach Jürgen Klinsmann faith that the American team can pull off the Round of 16 upset.

Of the 32 teams in the group stage, the Americans had the second-lowest number of attacks with just 72.

"We will work ... to shift our entire game up forward,” Klinsmann said, according to the Associated Press. “So that will put more pressure on the opponents and create more chances."

If you’re looking for history to be your guide, look again. The United States and Belgium also haven't played in a World Cup since the first one in 1930, although in that instance, it was a 3-0 win by the Americans.

At the pre-game party on Monday night, many U.S. fans were optimistic enough to have booked tickets to Brasilia, where, on Saturday, July 5, the American team would face the winner of the earlier game between Argentina and Switzerland.

“As of now, I have plans to fly home from Brasilia on Saturday evening,” Robertson said. “I’ve seen a lot of Argentineans over the past couple of days, and I told them I would see them in Brasilia.”