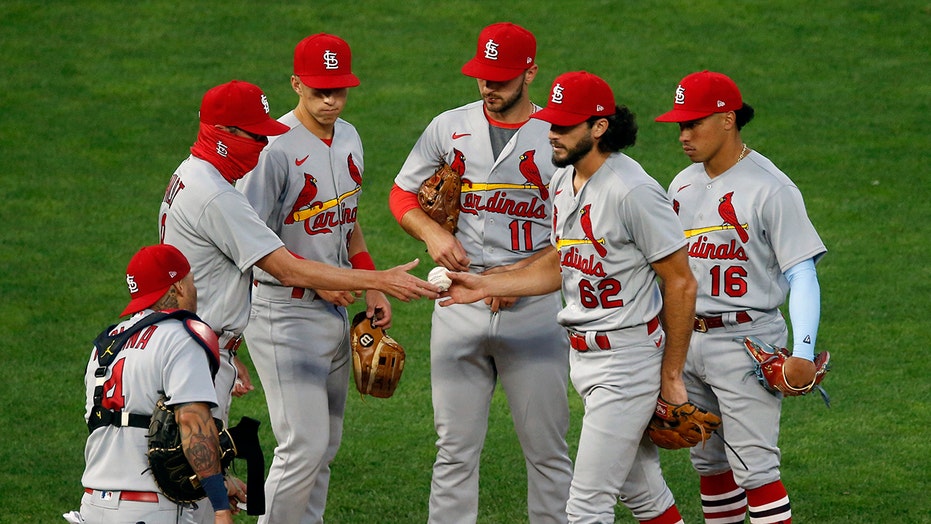 Twenty percent of Major League Baseball teams has been forced to postpone games Friday night because of positive coronavirus tests.

The sport has been back for a little over a week and on Friday games between the Washington Nationals and Miami Marlins, Philadelphia Phillies and Toronto Blue Jays and Milwaukee Brewers and St. Louis Cardinals were postponed because of the coronavirus.

MLB Network, and others, reported that the latest postponement was the game between the Brewers and Cardinals. It would have been the Brewers’ home-opener at Miller Park. According to the report, the Cardinals were the team with positive tests and elected to quarantine in their team hotel.

MLB officially postponed Friday's game. Sunday's matchup will be played as part of a doubleheader.

The Marlins’ outbreak raised alarm throughout the sport on Sunday when four players tested positive for the coronavirus. As the week progressed, 17 players and coaches had reportedly contracted the virus. MLB put their season on pause because of the outbreak.

MLB released a statement on the Marlins’ issue on Monday.

"The health and safety protocols were designed with a challenging circumstance like the one facing the Marlins in mind. The response outlined in the joint MLB-MLBPA Operations Manual was triggered immediately upon learning of the cluster of positive cases, including contact tracing and the quarantining and testing of all of the identified close contacts. The Marlins’ personnel who tested positive remain in isolation and are receiving care," MLB said in a statement.

The statement continued, "In over 6,400 tests conducted since Friday, July 24th, there have been no new positives of on-field personnel from any of the other 29 Clubs. This outcome is in line with encouraging overall data since the June 27th start of testing. Through last Thursday, July 23rd, 99 of the 32,640 samples – 0.3% – had been positive.

"The difficult circumstances of one Club reinforce the vital need to be diligent with the protocols in all ways, both on and off the field," the league wrote. "We will continue to bolster our protocols and make any necessary adjustments. The realities of the virus still loom large, and we must operate with that in mind every day. We are confident that Clubs and players will act appropriately, for themselves and for others, and the data provides reason to believe that the protocols can work effectively."