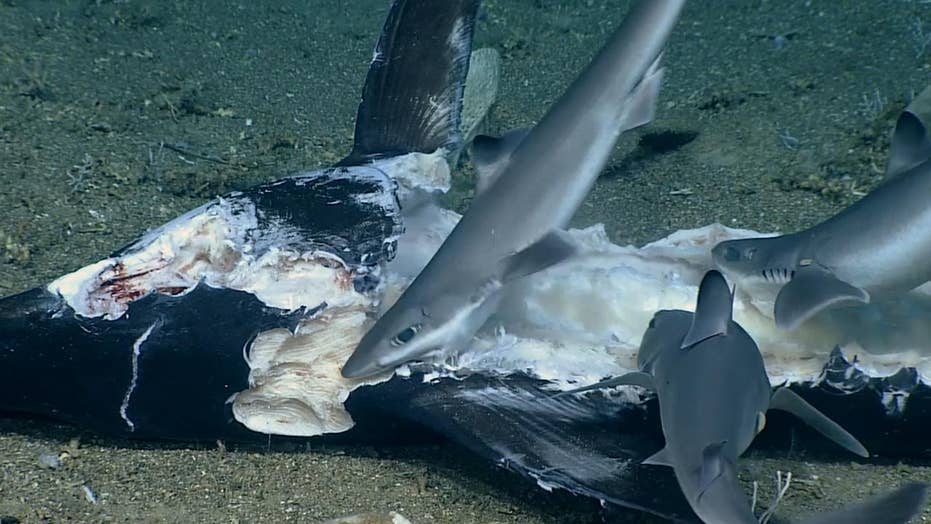 Wait for it: Video of shark feeding frenzy has surprise ending

Raw video: Scientists monitoring a shark feeding frenzy on a dead swordfish surprised as a giant wreckfish uses remotely operated vehicle as cover before snatching up a meal of its own.

Researchers exploring the depths of the ocean off the coast of South Carolina recorded a rare sight last month when they stumbled upon a shark feeding frenzy that had a surprise ending.

The NOAA Ocean Exploration and Research team shared the video of a school of sharks feasting on a dead swordfish on the ocean floor about 1,476 feet below the surface. As the sharks tear the 8-foot swordfish apart, a large bony fish known as a wreckfish creeps out from behind the researchers' remotely controlled vehicle and grabs a shark in its mouth.

The video ends as the shark’s tail is seen flailing from between the wreckfish’s lips while the predator swims by the camera it had used for cover.

The wreckfish “demonstrated the ability of large predatory fishes to feed on smaller sharks,” wrote Peter Auster, a senior research scientist at the Mystic Aquarium and research emeritus professor at the University of Connecticut. “The wreckfish appears unable to feed on the swordfish directly itself, but by joining the sharks, it was able to feed on an animal that was.”

The wreckfish appeared unable to feed directly on the swordfish and instead ate a shark that was eating the dead fish. (NOAA Office of Ocean Exploration and Research, Windows to the Deep 2019)

Wreckfish can grow over 6 feet in length and weigh as much as 220 pounds, according to the NOAA.

The school of small sharks was made up of two species of deep-sea dogfish: the smaller being Genie’s dogfish; the larger known as roughskin dogfish, the NOAA said. The sharks aren't normally seen in groups unless food is nearby.

“This rare and startling event leaves us with more questions than answers, but such is the nature of scientific exploration,” Auster wrote.

The researchers were originally exploring the depths for a World War II shipwreck as part of the Deep 2019 expedition into deep-water areas of the Southeastern U.S. The project runs from May 30 to July 12.