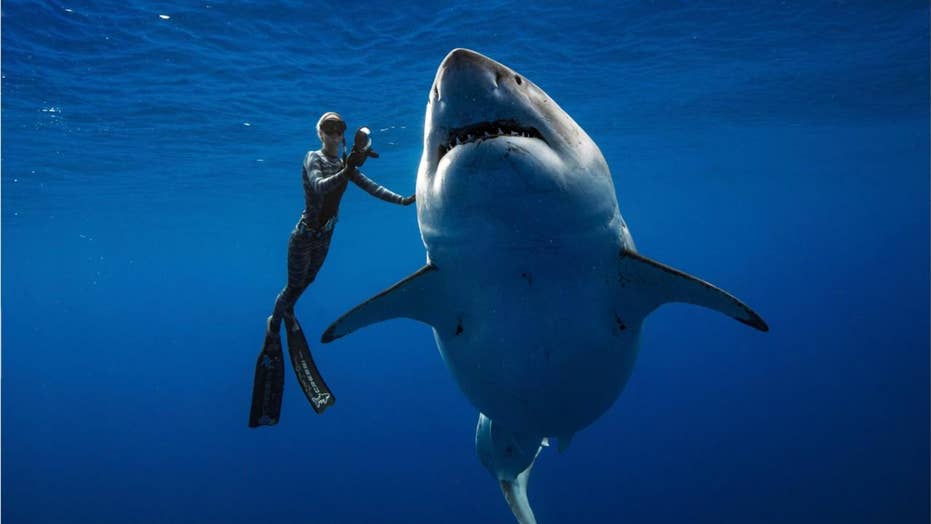 Incredible images have surfaced after a diver was spotted swimming alongside the world's largest great white shark, a 20-foot behemoth known as "Deep Blue."

Diver and photographer Kimberly Jeffries had hoped to capture images of sharks in the water feeding on a carcass of a dead sperm whale, but what she encountered was the experience of a lifetime. "We noticed tiger sharks coming up to the back of the engines," she said in an interview with BBC's Newsbeat. "It was perfect because it was ultimately what we came out to see."

Jeffries continued: "Maybe 30 seconds later we see this massive shark, just kind of gracefully and slowly rising out of the depth. And she comes up to feed on the carcass. "I thought my heart was going to explode."

Deep Blue is estimated to be more than 50 years old, according to HawaiiNewsNow. According to a 2014 study, great white sharks have an average lifespan of 70 years, though it varies between male and females.

Prior to being spotted in Hawaii, the great white was caught on video in July 2018 near Guadalupe Island, off the west coast of Mexico's Baja California peninsula.

A shark said to be 'Deep Blue', one of the largest recorded individuals, swims offshore Hawaii, U.S., January 15, 2019 in this picture obtained from social media on January 17, 2019. (Credit: Reuters)

When Jeffries' friend, Andrew first spotted "Deep Blue," he alerted her to it, but she was still shocked, adding they were "just absolutely blown away."

"The sheer size of her was awe-inspiring," she continued. "I think in the first couple of seconds when we first realized it was a great white, I thought my heart was going to explode. But then, after that initial racing, and you shift into work mode, it kind of goes away."

Jeffries said she never felt threatened by "Deep Blue," who was initially spotted near Hawaii earlier this week. "I felt pretty confident, that with such a readily available food source, there was no danger whatsoever."

She also posted images of her experience to Instagram, including a video of "Deep Blue" feeding on the carcass.

Despite that, Jeffries said that her experience with "Deep Blue" was different than with other sharks she has worked with.

"It was apparent that this was something just much more magical and much more special," Jeffries described. "It's an incredibly humbling experience. These are apex predators so they are to be respected."