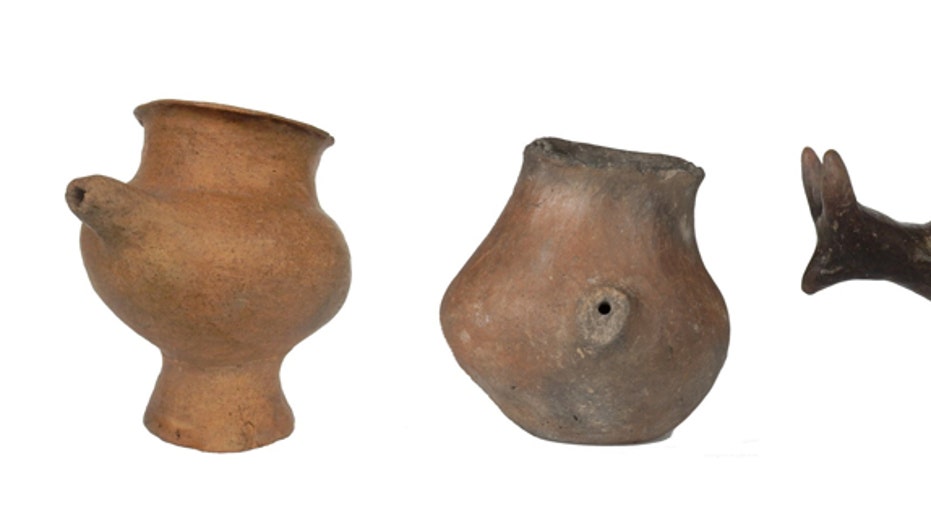 A 3,000-year-old clay container that is described as the world's first "baby bottle" has been unearthed by researchers.

The container, found in a Bronze Age tomb in Bavaria, southern Germany, was buried along with the cremated remains of a small child, likely between the ages of 1 and 2, reports South West News Service (SWNS) a British news agency.

SWNS adds that the container was used to feed infants milk from cows, goats or sheep. It's also possible that there were other containers used during Neolithic times as baby bottles, but there is no definitive proof.

The world's first "baby bottle" used by our Bronze Age ancestors more than 3,000 years ago has been unveiled by scientists. (Credit: SWNS)

"These very small, evocative, vessels give us valuable information on how and what babies were fed thousands of years ago, providing a real connection to mothers and infants in the past," said Dr. Julie Dunne, the study's lead author and a geochemist at the University of Bristol.

The container had a two-inch-wide bowl, as well as a narrow spout used to pour the liquids.

Researchers had previously thought babies were fed by their mothers with their own breast milk. The discovery has caused them to reevaluate the way humanity has evolved over the past several thousand years.

The clay container was used to feed an infant fresh milk from cows, goats or sheep – up to 3,200 years ago. (Credit: SWNS)

"This evidence of the foodstuffs that were used to either feed or wean prehistoric infants confirms the importance of milk from domesticated animals for these early communities, and provides information on the infant-feeding behaviors that were practiced by prehistoric human groups," Dunne pointed out.

Two other vessels similar in nature were discovered in the graves of infants that date back between 2,800 and 2,450 years. They also contained fatty acids that were discovered by researchers.

Dunne noted that these vessels have appeared in other civilizations.

"Similar vessels, although rare, do appear in other prehistoric cultures – such as Rome and ancient Greece – across the world," Dunne added. "Ideally, we'd like to carry out a larger geographic study and investigate whether they served the same purpose."

The research has been published in the journal Nature.