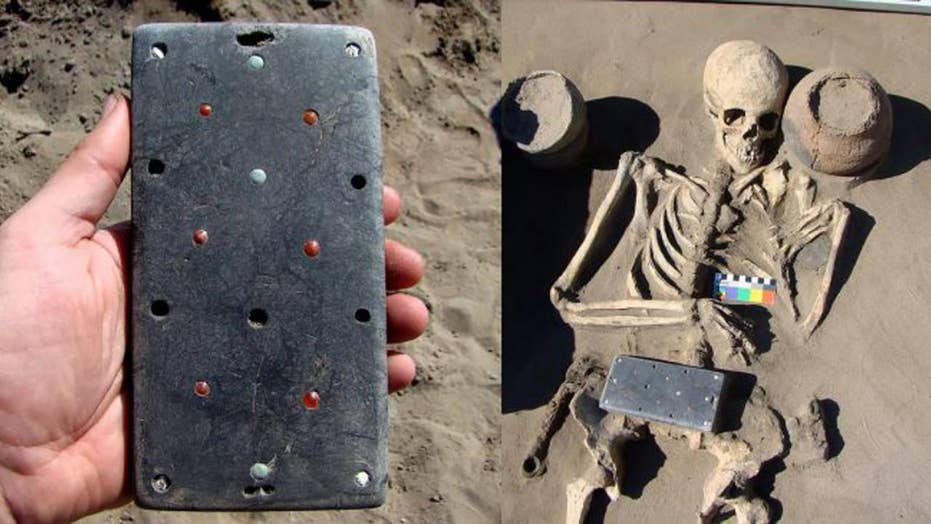 Dubbed ‘Natasha’s iPhone’ a 2,100-year-old artifact that was discovered in ‘Russian Atlantis,’ could pass for a modern-day iPhone

From the depths of Russia's "Atlantis" — a famed archaeological site in southern Siberia that lies underwater for most of the year — archaeologists emerged with what looks like a jewel-studded case for an iPhone.

But the black rectangle, which measures about 7 inches (18 centimeters) long and around 4 inches (9 cm) wide, is no electronics accessory; it's an ancient belt buckle made of jet — a gemstone made from pressurized wood — inlaid with small beads of mother-of-pearl, carnelian and turquoise, The Siberian Times reported.

Scientists with the Institute for the History of Material Culture at the Russian Academy of Sciences (RAS) found the object in a woman's grave, where it lay upon the skeleton's pelvis. The researchers nicknamed the woman "Natasha" and dubbed the artifact "Natasha's iPhone," according to The Siberian Times.

Although the buckle was discovered years ago, it recently drew renewed attention because Pavel Leus, one of the dig's archaeologists and a RAS researcher, shared the image on Instagram, Leus told Live Science in an email.

The grave that held the so-called iPhone lies in the Siberian territory of Tuva, near the border of Mongolia. There, archaeologists identified two burial sites — Terezin and Ala-Tey — dating to the Xiongnu period around 2,000 years ago, according to a study co-authored by Leus and published in 2018 in the journal Asian Archaeology.

However, there are only a few weeks each year when archaeologists can access these historically important locations, according to the Russian Geographical Society (RGS). The burial sites lie in a flood zone; they are covered by the Sayan Sea — an artificial reservoir — except when the flood waters recede, from the end of May through the first half of June, the RGS reported.

"Burials at both sites include many decorations for belts and clothing, beads, pendants, earrings, Chinese wu zhu coins, and Western Han mirrors and their fragments," the scientists wrote in the study.

In recent years, they found large and small jet buckles in three graves. The "massive" iPhone-like buckle had holes on the short sides, "with the two round holes on one side for fixing the buckle to the belt and one oval hole on the other side, probably for clasping," the researchers reported. Radiocarbon dating suggested that the grave's contents dated to between 92 B.C. and A.D. 71.

Jet objects from this period are rare, but some have surfaced in Russia's upper Volga region; in Transbaikalia, a mountainous zone to the east of Russia's Lake Baikal; in Mongolia; and in Central Asia, Leus said. It's possible that this type of ornament was common in Xiongnu culture and was brought west as these nomadic people migrated across the Eurasian steppes, he explained.

Rectangular bronze buckles, many of them carved with animal designs, also have been found in graves and settlements in Siberia, Mongolia and Central Asia, according to a report published in 2011 by the University of Bonn in Germany.

Though bronze and jet belt buckles are sometimes found in female burials in some parts of this Central Asian region, "they are generally found in well-furnished graves of warriors," the scientists wrote. Questions still linger about Tuva's graves and their contents, but more discoveries are expected to be announced in the coming months, Leus said in the email.