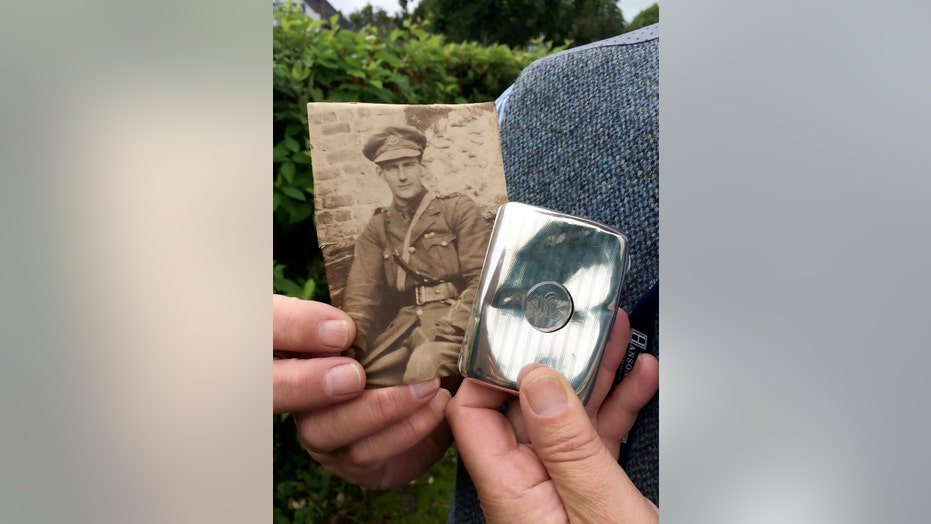 The miracle silver cigarette case that stopped a bullet from killing a British soldier during World War I "sparked a bidding war" and sold at auction for nearly $2,500.

The case belonged to 2nd Lt. William Alexander Lytle and was given to him by his wife before he headed off to battle, according to the British news agency SWNS.

Lytle kept it in his breast pocket and one fateful day, while he was in a battle with German soldiers, he was shot in the chest. The now-dented cigarette case took the full brunt of the bullet and saved Lytle's life.

A dented and damaged silver cigarette case, which appears to have taken the full force of bullet, has been unearthed by Hansons Auctioneers – and an aging note tucked inside reveals its secrets. (Credit: SWNS)

Along with the cigarette case, a note and medals belonging to Lytle sold for 1,850 British pounds ($2,377) to a private buyer in the U.K., according to Hansons Auctioneers, which handled the sale.

“It’s a fantastic auction result and well deserved," Adrian Stevenson, militaria expert at Hansons, said in comments obtained by SWNS. "This is an important historical item which helps us learn how soldiers coped with the grave dangers faced in the trenches in the war to end all wars."

Lytle, who served with the 1/6th Battalion Notts & Derbyshire Regiment, Sherwood Foresters, was later awarded the Military Cross for bravery and would also serve in World War II.

Info on the back of William Lytle's photo. (Credit: SWNS)

“Many kept hard objects in the breast pockets of their army uniforms in a bid to protect themselves from enemy fire," Stevenson added. "Cigarette cases, shaving mirrors and pocket Bibles were popular. A bullet potentially heading for the heart could be stopped in its tracks by objects such as this, particularly if it was reaching the end of its trajectory. Consequently, these objects have gained historical significance."

Lytle, who passed away at the age of 80 in 1974, received a Military Cross for "excellent work on several occasions," according to an article in the Dec. 24, 1915 edition of the Derbyshire Advertiser newspaper.

“William fought in two world wars – he gave his all for us all," Stevenson added. "It’s wonderful to think that a silver cigarette case, a gift given with love from his wife, may well have saved his life.”

In March, a 19th-century penny that miraculously saved the life of another British World War I soldier sold at auction for 4,500 British pounds.