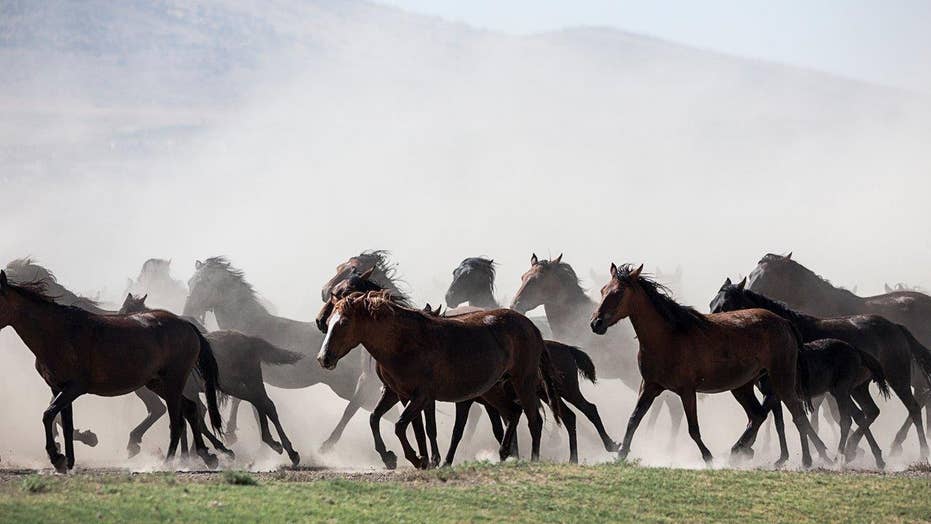 The U.S. government is coming under fire from animal rights activists amid concerns that almost 45,000 wild horses could be euthanized in an attempt to control their numbers.

Last week the Bureau of Land Management’s National Wild Horse and Burro Advisory Board recommended that the Bureau euthanize or sell “without limitation” excess “unadoptable” horses and burros in the BLM’s off-range corrals and pastures.

An “unadoptable” horse or burro is typically at least 5 years old, making them less attractive for purchase or adoption. The bureau has more than 44,000 horses and more than 1,000 burros in off-range pastures and corrals.

The recommendation prompted an angry response from The Humane Society of the United States. “The decision of the BLM advisory board to recommend the destruction of the 45,000 wild horses currently in holding facilities is a complete abdication of responsibility for their care,” said Humane Society Senior Vice President of Programs & Innovations Holly Hazard, in a statement.

With virtually no natural predators, wild horse and burro herd sizes can double about every four years, which means that thousands of the animals are removed from the range each year to control herd sizes and protect the land. The BLM has its own off-range holding corrals in states such as Nevada and California, as well as contracts with private ranches in locations such as Kansas and Oklahoma.

The Bureau has not yet made a formal response to the board’s recommendation, although, in a statement, it said that it will continue to care and seek good homes for animals that have been removed from the range. “What this means is that we will continue with our current policy, which is not to sell or send wild horses or burros to slaughter,” it said.

A BLM spokesman told FoxNews.com that the animals are protected. “These are public lands and the horses are a symbol of the history of the Old West,” he said. Since 1971, the BLM has adopted out more than 235,000 wild horses and burros, according to the spokesman. “We screen buyers and we screen adopters,” he added.

The agency also noted that the Wild Horse and Burro Advisory Board is an independent panel comprised of members of the public.

The bureau spent $49 million caring for off-range animals during its fiscal year 2015, which accounted for two-thirds of its wild horse and burro budget.

However, the Humane Society has slammed the agency’s efforts. “Over the past 20 years, the BLM has maintained round-up and removal as a primary management strategy for wild horse and burro populations on America’s western rangelands – an effort which has led to a financially unsustainable Wild Horse and Burro Program,” it said, in its statement. “By focusing massive efforts on removing horses and burros from the range, without treating those horses remaining on the range with any form of fertility control to limit population growth, holding facilities throughout the United States have become overburdened.”