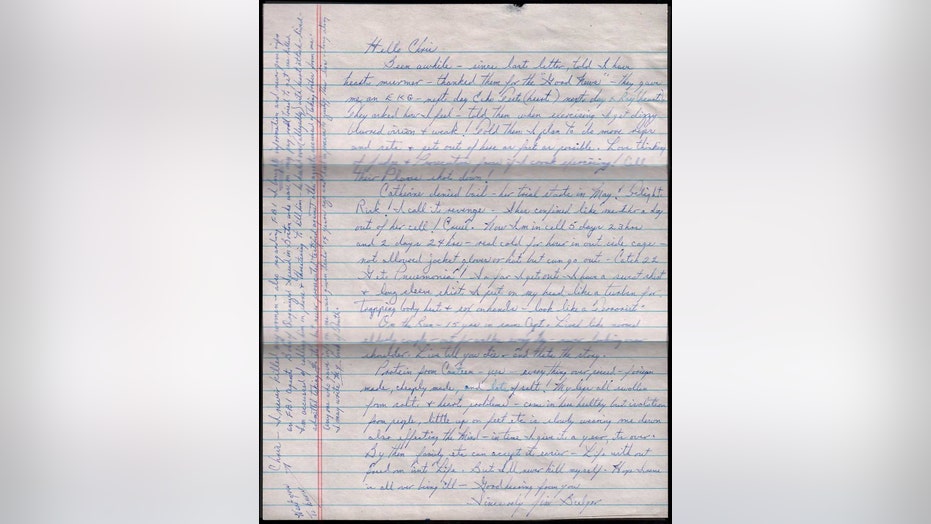 A letter written in prison by infamous Boston mob boss James "Whitey" Bulger detailing his declining health is up for auction.

The letter, sent to one of Bulger's friends, Chris Duett, in Brockton, Mass., is seemingly at odds with federal officials who said his health had dramatically improved prior to his transfer to a West Virginia prison. The letter was mailed from Plymouth County Correctional Facility in Plymouth, Mass., before Bulger was transferred to the United States Penitentiary Hazelton near Bruceton, W.Va., where he was ultimately killed.

" ...[C]ame in here healthy, but isolation from people, little (being) up on feet, etc. is slowly wearing me down," Bulger wrote in the letter. "Also affecting my mind - in time I give it a year, it's over. By then the family can accept it easier....But I'll never kill myself."

The letter also "[c]ontains many candid comments to Bulger's good friend concerning Bulger's criminal activities, his life on the run, and his troubles in prison," according to a description from auction house Leland's, which is running the sale. The letter has a starting bid of $300.

Bulger, who fled Boston until he was captured in California in 2011, added that people who testified against him were "given 'deals' 14 years ago and lied." He also noted that he and his former girlfriend "lived like normal elderly couple – went out for walks every day – never looking over [their] shoulder."

Other letters, which were provided to The Boston Globe by a California woman he corresponded with, highlight a will to live despite deteriorating health, including eight heart attacks. In one letter dated February 2018, Bulger wrote, "Don't worry about me ... I'm too mean to die."

He also wrote he wanted to live long enough to again see his girlfriend, Catherine Greig, with whom he spent 17 years on the run before their 2011 capture.

The 89-year-old Bulger was found bloodied and wrapped in a blanket at 8:21 a.m. on Oct. 30, 2018, apparently beaten with a lock stuffed in a sock. He had arrived at the facility less than 12 hours prior to his death.

This June 23, 2011, file booking photo provided by the U.S. Marshals Service shows James "Whitey" Bulger. Jailhouse letters from the late Boston gangster highlight his will to live despite deteriorating health including eight heart attacks. The letters provided to The Boston Globe by a California woman he corresponded with appear to contradict federal officials who have said Bulger’s health had dramatically improved, making him eligible for a transfer to a West Virginia prison where he was killed. Bulger was 89 when he was fatally beaten last October. (U.S. Marshals Service via AP, File)

A death certificate indicated that Bulger had died from “blunt force injuries of the head.” The crime boss was “assaulted by other(s)” in his “prison cell,” the document said. His death was ruled a homicide.