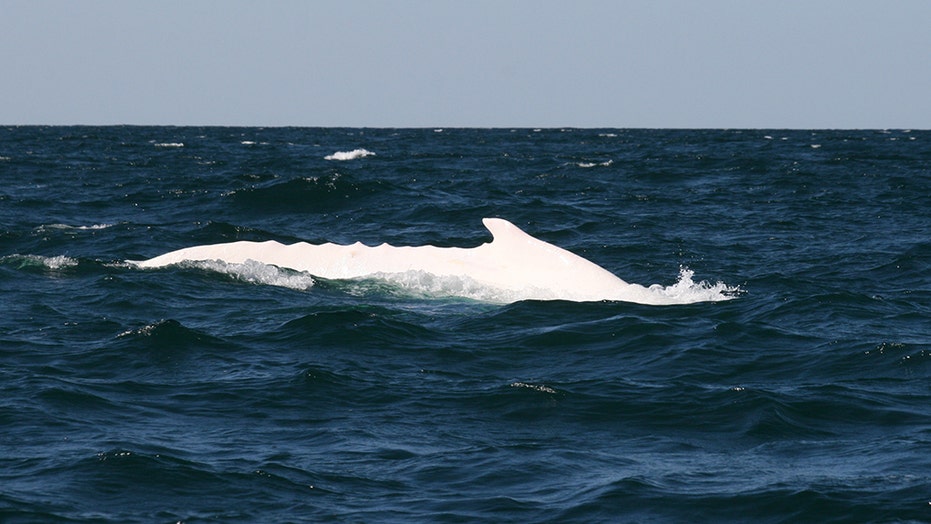 A rare albino humpback whale known as Migaloo has been spotted off the coast of Australia, delighting onlookers.

Considered an official mascot of the country, according to news.com.au, Migaloo has been making the trek from along the Mid North Coast for years. Usually, he's first spotted in New Zealand in June and then is spotted near Cape Byron or the Gold Coast in the latter part of July.

A full-grown adult, Migaloo weighs 40 tons and is approximately 50 feet long, the news outlet said. According to National Geographic, humpback whales can be between 48 and 60 feet in length and on average, weigh 40 tons.

BYRON BAY, AUSTRALIA - SEPTEMBER 28: An Australian white humpback whale named Migaloo is seen off the coast of Byron Bay, Australia's most easterly point, on September 28, 2009 in Byron Bay, Australia. Migaloo is the only documented white humpback whale in the world and has been named as such meaning 'White Fella' in the Aborginal Australian language. The whale was first spotted in 1991. (Photo by Rob Dalton/Getty Images)

With Migaloo supposedly turning 30 this year, the annual event takes on additional significance. The earliest sightings took place as far back as last month when Migaloo was spotted near Sydney.

"#Migaloo sighting! So great watching him traveling [sic] past the coast of Sydney!" one person wrote.

Another person spotted Migaloo towards the end of May, capturing the majestic leviathan on film.

The majestic mammal, which has a Twitter account and a website dedicated to him, has been spotted more than 50 times over the years, going back all the way to 1991 when he is believed to have been approximately 3 years old.

At the time, he was believed to be the only albino humpback in the world. Since then, three others have spotted, Bahloo, Willow and the aptly named, Migaloo Jr.

While 30 is a big milestone for Migaloo, Dr. Wally Franklin said he expects Migaloo to live a long, fruitful life.

“This year he is 30 years old, so he is now well and truly fully grown and fully mature. He’s mature socially and physically,” Dr. Franklin told news.com.au. “It doesn’t appear that he has had any issues with predators and he has an expectation to living as long as 100 years, which is the generally believed life expectancy.”

Migaloo is not the only humpback whale causing a commotion recently. In May, a group of humpbacks was spotted off the coast of Ireland interacting and playing with a pod of dolphins.