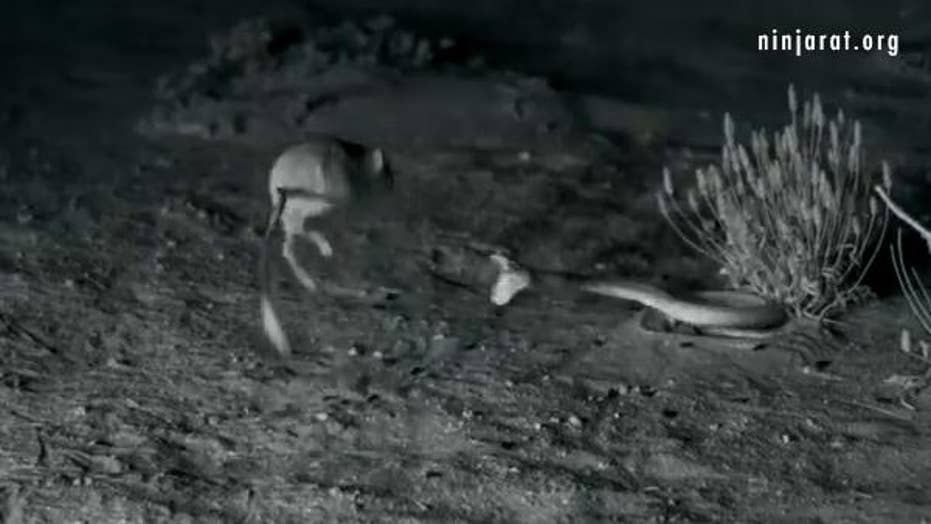 Remarkable video has captured a kangaroo rat leaping high into the air and kicking a rattlesnake in its face after the snake attempted to strike.

Even Jackie Chan would be jealous of this kick.

A remarkable video has captured a kangaroo rat in Yuma, Az. leaping high into the air and kicking a rattlesnake in its face after the snake attempted to strike at the rat.

Timothy Higham, an associate professor in the Department of Evolution, Ecology and Organismal Biology at UC Riverside, published two papers that can be found here and here on the incredible athleticism and behaviors of both species, describing both as "extreme athletes."

"Both rattlesnakes and kangaroo rats are extreme athletes, with their maximum performance occurring during these interactions," Higham said in a statement. "This makes the system excellent for teasing apart the factors that might tip the scale in this arms race."

"We found that kangaroo rats escaping from snake strikes relied on rapid response times to initiate effective evasions," one of the study's abstract reads. "During jumps, their enlarged hindlimbs propelled vertical leaps that were multiple body lengths into the air, and these leaps were often accompanied by mid-air kicks and other maneuvers that deterred snakes."

For kangaroo rats, who generally eat seeds, these attacks are commonplace. However, the tracking of the encounters by the researchers revealed that the two are evenly matched and show for the first time ever the defensive maneuvers the kangaroo rats use.

"These lightning-fast and powerful maneuvers, especially when executed in nature, tell us about the effective strategies for escaping high-performing predators," Higham continued. "Those that are successful at evading the strike will suggest ways in which the kangaroo rat might be evolving in response to the intricacies of the predatory movements."

The "lightning-fast" description Higham provided might be considered hyperbole by some, but it is accurate. The researchers found that the snakes on average reached their prey in less than 100 milliseconds, but the rats were significantly faster, reacting in as little as 38 milliseconds and jumping clear of the snakes in 70 milliseconds, according to the researchers.

A typical bolt of lightning bolt moves at 224,000 mph, or roughly 3,700 miles per second. The speed of an average blink of a human eye is between 300 and 400 milliseconds and can be as little as 150 milliseconds, according to the statement.

Although the kangaroo rats are mind-bogglingly quick, some of them did not react quick enough to avoid the strikes, Rulon Clark, an associate professor of biology at San Diego State University and a coauthor on both research papers, added.

However, they had another trick to avoiding the danger: "they often were able to avoid being envenomated by reorienting themselves in mid-air and using their massive haunches and feet to kick the snakes away, ninja-style," Clark said.