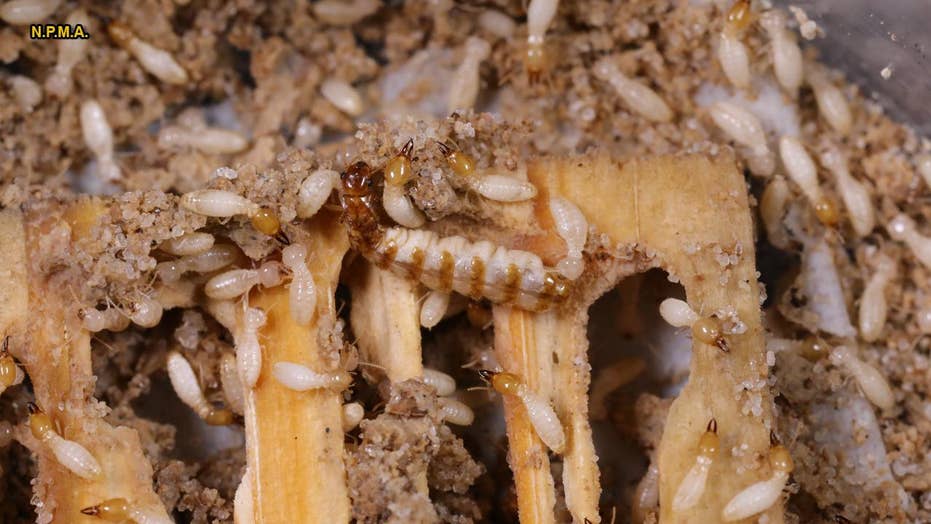 A shocking video released by the National Pest Management Association shows the devastating impact of over half a million termites on a specially-built scale-model home, complete with electricity, plumbing and insulation.

Termites can literally eat you out of house and home, as evidenced by a shocking video released by the National Pest Management Association.

The video shows the devastating impact of over half a million termites on a specially-built scale-model home, complete with electricity, plumbing and insulation. NPMA researchers built the model home in January at a secure location in New Orleans.

Researchers spent February and part of March collecting the insects. More than 500,000 subterranean termites were introduced into the soil around the house in early March. The insects’ activity was then carefully monitored over the following month.

HERE'S WHY COCKROACHES CAN SURVIVE JUST ABOUT ANYTHING

“Upon introduction, the termites immediately found the structural weaknesses of the foundation, infiltrating cracks in the cement and finding easy access points at the corners of the home where the wood came together,” explained the National Pest Management Association, in a statement. “The first indication that the termites found their way into the home was the formation of mud tubes that the termites built to give them cover and provide pathways to reach their food source.”

Mud tubes look like an accumulation of dirt and sand and are a common, yet easy to miss sign of termite activity, according to the organization. “Once their mud tubes were formed, the termites went to town on the wood joists and plywood first before moving up into to the drywall.”

Within two months, the termites had wrought devastation on the tiny home. “Our researchers conducted a final tour of the home at the end of April, during which time they found that nearly all of the floor and wall joists had been completely eaten away,” explained the NPMA. “The hardwood floors had buckled from the moisture left by the termites and the structure of the house was a total loss.”

When the experts lifted the sub flooring from cement slab of the house’s foundation they made a particularly unpleasant discovery - hundreds of thousands of termites were living beneath the flooring.

Subterranean termites eat 24/7, making them the most destructive termite found in the U.S., according to the NPMA.

Termites cause over $5 billion in property damage annually, the organization says, a cost that is typically not covered by homeowners insurance.