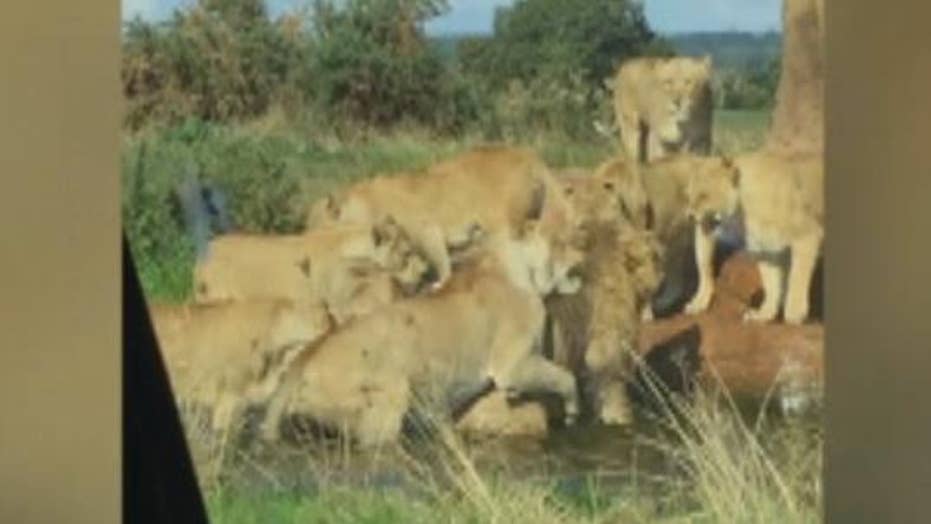 A group of lionesses attacked a lion at West Midlands Safari Park over food, as a group of visitors caught the disturbing footage on film.

This is the moment nine lionesses brutally attacked a lion in front of horrified visitors in Worcestershire, England.

Shocking footage shows the pack of females tearing their teeth into the leader of the pride's flesh at West Midlands Safari Park.

The lionesses then drag him from the rocks into the water where he is seen helplessly roaring in pain.

Safari workers at the enclosure in Bewdley, Worcs., had to step in and spray fire extinguishers at the beasts to break up the ferocious attack after the male was left covered in blood.

It is conceivable the lionesses were trying to kill their leader because he was too old to run the pride.

However, Mya Beverstock, who caught the attack on film, said the females may have pounced on him after a dispute over food.

She said: "It pretty much happened out of the blue. It was feeding time and then suddenly we heard growling and roaring.

"Two other males stepped back and didn't get involved while the females attacked the leader. He may have ate before his turn."

She added: "Safari workers dealt with it very quickly. Three jeeps ended up in the enclosure honking their horns and driving towards the lions to break them up.

"One of the jeeps sprayed them with a fire extinguisher which ended up mostly breaking up the fight.

"We did go around the park again afterwards and all the female lions had been removed from the enclosure and it was only the three males in there."

Luckily, the lion who was pounced on survived the brutal attack.

In February of this year a pride of lions pounced at a car at the same safari park.

No one was injured in the attack but the roof was left dented and scratched.

Editor's note: West Midlands Park issued an update on the attack, saying the male lion, Jilani, did not experience any serious injuries and only suffered some stiffness and soreness.