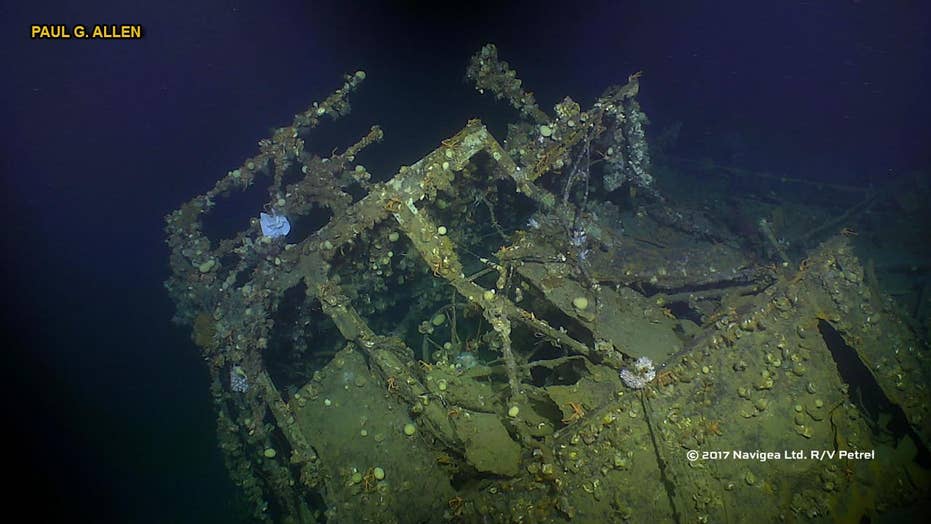 The USS Ward was located in the waters near Ponson Island in the Philippines, an expedition crew led by Microsoft co-founder and philanthropist Paul Allen announced, just before the anniversary of the attack on Pearl Harbor.

“This is going to be the first time the Ward has been seen in 73 years since she was sank,” Robert Kraft, director of subsea operations for the research vessel Petrel, said as an underwater drone inspected the ship on Dec. 1. “We got some wreckage just coming into view.”

Images coming from the drone showed the ship’s remains heavily overtaken by marine life, giving the scraps varying shades of bluish-green color. The ship will be left alone -- untouched -- at its current location.

The bow of the USS Ward. (Photo courtesy of Paul G. Allen )

"The USS Ward found herself in the crucible of American history – at the intersection of a peacetime Navy and war footing,” Adm. Scott Swift, commander of the U.S. Pacific Fleet, was quoted as saying in a press release. “She took decisive, effective and unflinching action despite the uncertain waters. Now 76 years on, her example informs our naval posture.”

On Dec. 7, 1941, the Wickes-class destroyer sank a Japanese midget submarine in Pearl Harbor around an hour before the infamous attack began. The crew of the Ward was alerted of the vessel’s presence by the cargo ship USS Antares, which said it had a “suspicious object” following it into the harbor.

“Within moments, at 0640 Ward was a ship alive, the general quarters alarm rousted the men from their bunks and sent them on the double to their action stations,” says a biography of the ship by the Naval History and Heritage Command.

“The first shot of the Pacific war barked from Ward's gun at 0645 and splashed harmlessly beyond the small conning tower,” it added.

The USS Ward continued firing at the submarine, described in the release by Allen’s crew as one of five top secret Japanese vessels armed with two torpedoes intended to penetrate the harbor under the cover of darkness.

“As Ward pounded past at 25 knots, number three gun atop the galley deckhouse amidships commenced fire, its round passed squarely through the submersible's conning tower,” the Naval History and Heritage Command said. “As the Japanese midget wallowed lower in the water and started to sink, the destroyer swiftly dropped four depth charges, signalled by four blasts on the ship's whistle. Black water gushed upwards in the ship's boiling wake as the charges went off, sealing the submarine's doom.”

The Ward is credited with firing the first American shots during World War II, even though the U.S. didn’t officially enter the conflict until a day after the Pearl Harbor attack.

It went on to perform a variety of duties in the Pacific theater, including assisting in numerous landings, going on antisubmarine patrols and fending off a Japanese air attack in the area of Guadalcanal in June 1943.

Three years to the day after Pearl Harbor, the Ward was patrolling the Ormoc Bay off the Philippines island of Leyte when it was attacked by several Japanese kamikazes.

“Ward's gunners opened fire with 3-inch and 20-millimeter batteries, hitting the center plane that wavered and crashed the ship at the waterline at 0956, entering the forward part of the boiler room and the after part of the lower troop space,” the Naval History and Heritage Command said. “Men in the forward part of Ward could not contact those in the aft, since the fires amidships had severed all communications.”

An out-of-control blaze soon engulfed the ship and less than a half hour after being hit, the crew were given orders to abandon. The nearby USS O’Brien led by Lt. Cmdr. William Outerbridge, who was in charge of the Ward in Pearl Harbor, scuttled the ship, and only one crew member was injured. All of them made their way on board other nearby ships.

The BXL79 underwater remotely operated vehicle, can conduct missions up to 7,000 meters deep, is deployed from the Petrel. (Photo courtesy of Paul G. Allen)

“It just was something that had to be done,” Outerbridge was quoted as saying years after sinking the Ward, adding that there was little emotion involved in executing the task.

GERMAN WW I SUBMARINE DISCOVERED INTACT WITH 23 BODIES INSIDE

The ship, for all its service, has received one battle star for World War II as a destroyer and eight as a high speed transport, the Navy says.

The Research Vessel Petrel, led by Allen’s crew, cross-referenced historic drawings and schematics of the ship to confirm that the location was accurate. It was found 650 feet below the ocean's surface, according to Stars and Stripes.

"The Petrel and its capabilities, the technology it has and the research we've done, are the culmination of years of dedication and hard work," Kraft said. "We've assembled and integrated this technology, assets and unique capability into an operating platform which is now one among very few on the planet."

Expedition leaders said the survey of the Ward was part of a mission to document Imperial Japanese Warships that were sunk during the Battle of Surigao Strait in the Philippines. More than 4,000 men were lost in the battle, in what is considered part of the larger Battle of Leyte Gulf, the last between battleships.

A November expedition by the Petrel in the area captured video of the sunken Yamashiro and Fuso, both dreadnought class battleships, and the Asagumo and Michishio, both destroyers.

An August expedition led by Allen also found wreckage from the USS Indianapolis, which sank in the Philippine Sea after being torpedoed in 1945 by the Japanese. The sinking of the ship was the greatest single loss of life in Navy history, as only 317 survived from a crew of 1,196.

“We’ve done a number of these explorations to try to find sunken warships,” Paul Allen said. “We try to do these both as really exciting examples of underwater archeology and as tributes to the brave men that went down in these ships.”