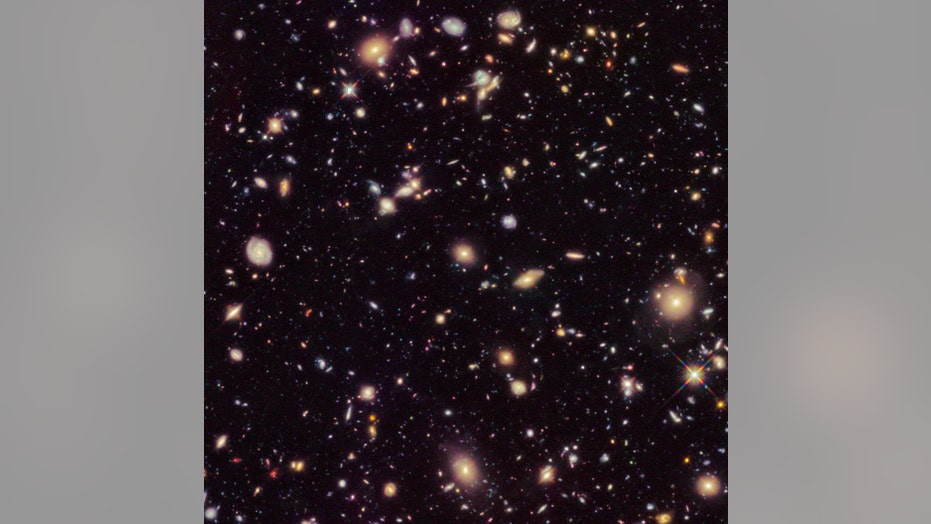 The universe is assumed to be roughly 13.7 billion years old, but a stunning new study says it could be significantly younger than that — by a  couple of billion years.

According to the study, researchers used new calculations that took different approaches to figure out just how old the universe really is.

"We have large uncertainty for how the stars are moving in the galaxy," the study's lead author, Inh Jee, of the Max Planck Institute, told the Associated Press. The research has been published in Science.

This image made available by the European Space agency shows galaxies in the Hubble Ultra Deep Field 2012, an improved version of the Hubble Ultra Deep Field image. A study published Sept. 12, 2019, uses a new technique to come up with a rate that the universe is expanding that is nearly 18 percent higher than the number scientists had been using since the year 2000. (Credit: NASA, ESA, R. Ellis (Caltech), HUDF 2012 Team via AP)

The age of the universe comes from the Hubble Constant (H0), but according to the study's abstract, different techniques "lead to inconsistent estimates" of the measurement.

"Observations of Type Ia supernovae (SNe) can be used to measure H0, but this requires an external calibrator to convert relative distances to absolute ones," the abstract reads. "We use the angular diameter distance to strong gravitational lenses as a suitable calibrator, which is only weakly sensitive to cosmological assumptions."

Scientists estimate the age of the universe by using the movement of stars to measure how fast it is expanding. If the universe is expanding faster, that means it got to its current size more quickly and therefore must be relatively younger.

In 2013, a team of European scientists looked at leftover radiation from the Big Bang and pronounced the expansion rate a slower 67, while earlier this year Nobel Prize-winning astrophysicist Adam Riess of the Space Telescope Science Institute used NASA's super telescope and came up with a number of 74. And another team earlier this year came up with 73.3.

Jee and outside experts had big caveats for her number. She used only two gravitational lenses, which were all that were available, and so her margin of error is so large that it's possible the universe could be older than calculated, not dramatically younger.

Harvard astronomer Avi Loeb, who wasn't part of the study, said it is an interesting and unique way to calculate the universe's expansion rate, but the large error margin limits its effectiveness until more information can be gathered.

"It is difficult to be certain of your conclusions if you use a ruler that you don't fully understand," Loeb said in an email to the AP.

Loeb has gained notoriety in recent memory for suggesting that interstellar object Oumuaua is an extraterrestrial probe.