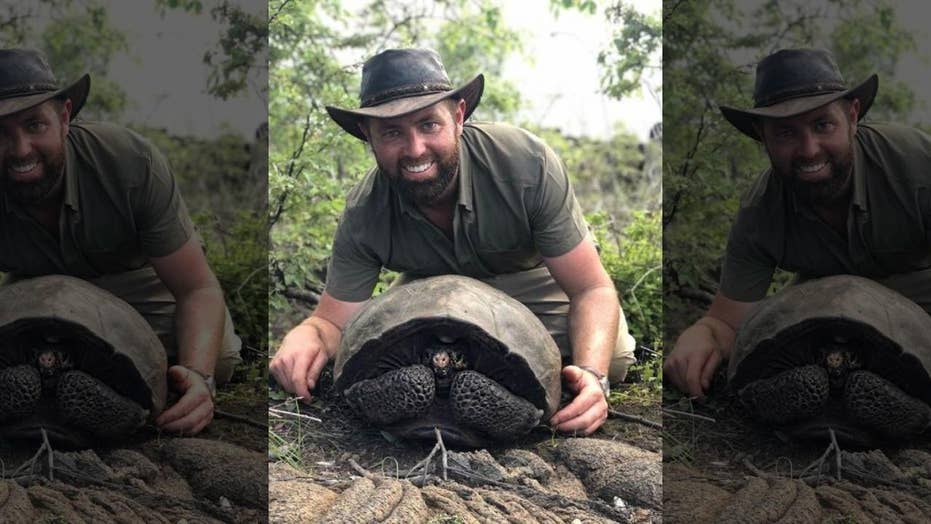 A female tortoise thought to be extinct for 113 has been discovered in the Galapagos during an Animal Planet expedition. The tortoise is being taken to a breeding center.

A tortoise thought to be extinct for 113 years has been rediscovered on a remote volcanic island in the Galapagos.

The amazing reptile find was made earlier this week during an Animal Planet expedition led by biologist and “Extinct of Alive” host Forrest Galante. The Fernandina Tortoise, which was thought to have become extinct in 1906, was spotted on February 17. At this stage, it's not known how old the tortoise is.

“Having positively identified tortoise scat in the field, the team led by Galante successfully located an active bedding site before finding the animal nearby,” explained Animal Planet, in a statement. “The tortoise was found sheltering from the equatorial sun, buried deep under a pile of brush.”

THE FASCINATING SEX LIFE OF JONATHAN, THE 185-YEAR-OLD GIANT TORTOISE

Photos and video of the reptile were sent to biologists at the Turtle Conservancy and she was identified as a female Chelonoidis phantasticus, or Fernandina Tortoise.

"Since only one other specimen of this species has ever been found (a deceased male collected in 1906), we have never seen a female of the species," said Anders Rhodin of the Turtle Conservancy, in the statement. "The photos from the team clearly show a moderately saddle-backed, old female about half to two-thirds the size of the known male. Pending genetic confirmation, this is almost undoubtedly the lost Fernandina Giant Tortoise."

The tortoise is described as being in good health, but underweight. Wildlife experts have taken the animal to a breeding center on Isla Santa Cruz in the Galapagos archipelago. The Fausto Llerena Tortoise Breeding Center has successfully bred and released 4,000 Galapagos tortoises and experts hope that the rediscovered tortoise may one day be able to breed.

“This facility will ensure her ongoing survival, a healthy diet and perhaps, if sperm retention has occurred, fertile eggs and offspring,” explained Animal Planet, in its statement. “The hope is that her discovery will prompt new searches and ongoing funding for the location of a suitable mate with the ultimate goal of re-releasing many healthy animals back onto the island.”

The discovery marks a stark contrast to the sad fate of Lonesome George, a giant Galapagos tortoise whose failed efforts to produce offspring made him a symbol of disappearing species. Lonesome George, who was believed to be the last living member of the Pinta island subspecies, died at the Fausto Llerena Center in 2012.

ALBINO BABY TURTLE BORN WITH HEART OUTSIDE ITS BODY

Various mates had been provided for Lonesome George after he was found in 1972, in what proved unsuccessful attempts to keep his subspecies alive.

Set against this backdrop, experts are thrilled with the rediscovery of the female Fernandina Tortoise. “As a biologist and someone who has dedicated my life to the pursuit of animals believed extinct, this is by far my greatest scientific accomplishment and proudest moment,” said Galante, in the statement. “Much like Lonesome George was an icon of extinction, I believe she can become an icon of wildlife hope. She’s the rarest tortoise, if not animal, in the entire world and one of the largest discoveries in the Galapagos in the last century.”

Galante’s expedition to the Galapagos and the discovery of the ‘extinct’ tortoise will be featured in an episode of “Extinct or Alive” in summer 2019.

Tortoises have been in the spotlight in recent years. Jonathan, the famous giant tortoise who resides on the remote South Atlantic island of St. Helena, made headlines in 2017 when the Times reported that Frederica, the tortoise he had been “wooing” for 26 years, may actually be a ‘Frederic’.

Jonathan, who is about 186 years old, is believed to be the world’s oldest living land animal.