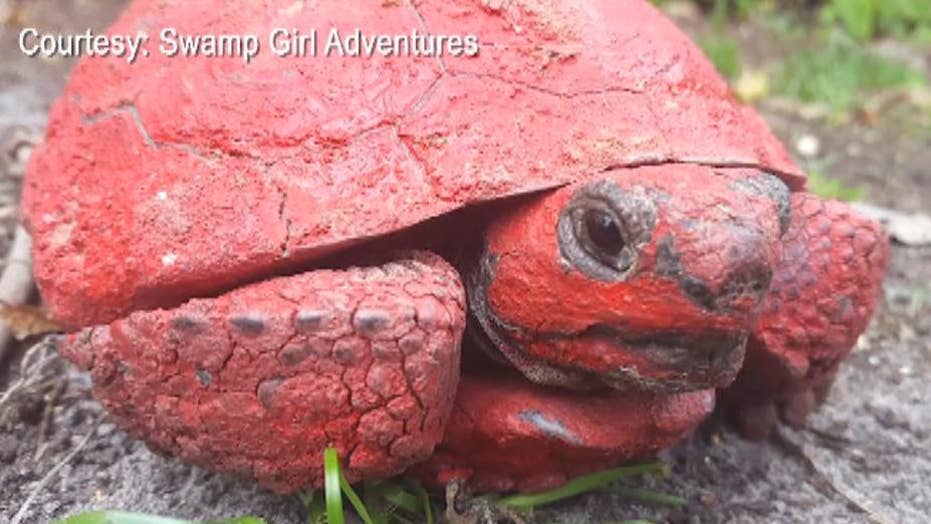 Tortoise found in Florida covered in red paint and concrete

A gopher tortoise was found in Florida covered in red paint and concrete. Florida Fish and Wildlife Conservation Commission officers are looking for the people responsible.

Authorities in Florida are asking for help after a gopher tortoise was found earlier this week covered in red spray paint and with concrete on its limbs.

The Florida Fish and Wildlife Conservation Commission said in a news release on Wednesday that two people came across the tortoise on County Road 455 in the town of Montverde, located about 30 miles west of Orlando. The pair then took it to a wildlife rehabber.

Titterington said volunteers have been able to get the tortoise about 70 percent cleaned up after gently chipping away concrete and attempting to get the red paint off. There is still a significant amount of paint on the face and skin of the reptile, and the concrete is still causing issues on its underside.

A tortoise named Raphael was found covered in concrete and red paint this week along a road in Florida. (FOX35)

She's since named the tortoise Raphael, and said that painting reptiles such as tortoises is actually a common problem she and other wildlife experts see. Sometimes it can be children decorating the animal's shell or someone marking a crack on it, which can be very dangerous for the animal.

"Applying substances like paint on tortoises can inhibit their ability to absorb vitamins from the sun’s UV rays through their shells, has the potential to cause respiratory problems and can lead to harmful chemicals being absorbed into their bloodstream," according to the FFWCC.

Titterington told FOX35 she hopes to rehab Raphael completely and will eventually be able to release him back into the wild.

While it’s not certain that the abuse to Raphael was intentional, she said she’s struggling to find other possible explanations.

"Even if he was like ‘in the line of fire,’ if they were painting something or marking something there should just be like a strip or a splatter,” Titterington said. “The amount he had and the thickness of it was just incredible."

Volunteers have been able to get the tortoise about 70 percent cleaned since finding it this week. (Kim Titterington/Florida Fish and Wildlife Conservation Commission)

Gopher Tortoises are considered threatened and are protected in Florida. The wildlife agency is now offering a reward for information that could help them find who did this to Raphael.

"If you have any information about who may have applied the paint and concrete on the tortoise, please call our Wildlife Alert Hotline at 888-404-FWCC (3922), #FWC or *FWC on a cellphone, or text/email Tip@MyFWC.com," the agency said in a Facebook post.