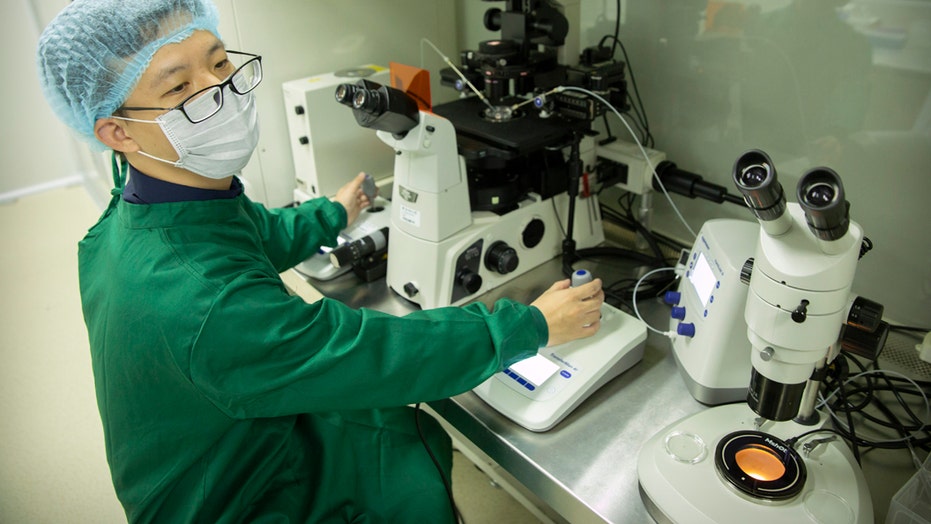 Three researchers involved in creating gene-edited babies were sentenced on Monday as China confirmed a third gene-edited child was also born, according to its state news agency.

Xinhua reported that researchers He Jiankui, Zhang Renli and Qin Jinzhou were all sentenced for their roles in creating the babies that caused an ethical and international outrage last year.

The existence of the first two children, Lulu and Nana, were announced by He in November 2018 at the International Human Genome Editing Summit, but there was no mention of a third child, until recently.

In this Oct. 10, 2018, photo, Chinese scientist He Jiankui speaks during an interview at his laboratory in Shenzhen in southern China's Guangdong province. Chinese state media says the researcher He has been sentenced to three years for practicing medicine illegally. He Jiankui was also fined 3 million yuan. Two others were also sentenced on the same charge. (AP Photo/Mark Schiefelbein)

He Jiankui got three years in prison for practicing medicine without a license. He was also fined 3 million yuan ($430,000) by a court in the southern city of Shenzhen for his role in implanting "genetically-engineered embryos into the females' body," Xinhua reported.

"[T]heir acts were 'in the pursuit of personal fame and gain' and have seriously 'disrupted medical order,'" the state-run news agency added.

The verdict said the three defendants had not obtained qualification as doctors, pursued fame and profits, deliberately violated Chinese regulations on scientific research, and crossed an ethical line in both scientific research and medicine, according to Xinhua. It also said they had fabricated ethical review documents.

In this Oct. 9, 2018, photo, Chinese scientist Qin Jinzhou works with embryos in a laboratory in Shenzhen in southern China's Guangdong Province. Qin received an 18-month sentence, but with a two-year reprieve, and a 500,000 yuan fine. (AP Photo/Mark Schiefelbein)

Following the November 2018 revelation, there was an enormous global debate over the ethics of what He and the other researchers had done, including the use of a gene-editing tool known as CRISPR. The Chinese government ordered a halt to their work shortly after the announcement. He was reported as missing that December and was fired from the university where the research was conducted.

Southern University of Science and Technology in Shenzhen, China, the college where Jiankui worked, issued a statement, condemning the claim. "The University was deeply shocked by this event and has taken immediate action to reach Dr. Jiankui He for clarification. Dr. Jiankui He’s previous affiliation, the Department of Biology (hereafter the Department) called an emergency meeting of the Department Academic Committee," the university said in a November 2018 statement.

Others called for extensive scrutiny regarding Jiankui's claims, including one of CRISPR's co-inventors, Dr. Jennifer Doudna of UC Berkeley, who said at the time that the work needed to be verified before it can be substantiated.

“If verified, this work is a break from the cautious and transparent approach of the global scientific community’s application of CRISPR-Cas9 for human germline editing," Doudna said in November.

The CRISPR tool has been tested elsewhere in adults to treat diseases, but many in the scientific community denounced He's work as medically unnecessary and unethical, because any genetic changes could be passed down to future generations. The U.S. forbids editing embryos except for lab research.

FILE - In this Oct. 9, 2018, file photo, an embryologist who was part of the team working with scientist He Jiankui adjusts a microplate containing embryos at a lab in Shenzhen in southern China's Guandong province. (AP Photo/Mark Schiefelbein, File)

He, who is known as “JK," told the AP in 2018 that he felt a strong responsibility to make an example, and that society would decide whether to allow the practice to go forward. He disappeared from public view shortly after he announced his research at a conference in Hong Kong 13 months ago, and was apparently detained by authorities, initially in an apartment in Shenzhen, a city in Guangdong province that borders Hong Kong.

It wasn't clear if the three-year prison term includes any of the time he has already spent in custody.