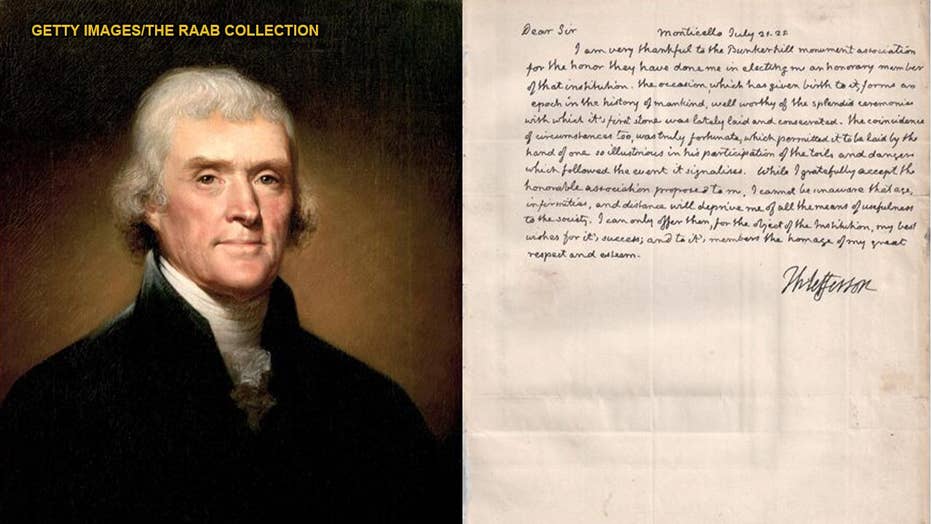 A recently uncovered letter written by Thomas Jefferson described how the battle of Bunker Hill impacted the American Revolution and the 'history of mankind'. The letter was once published in the 1880s but had been 'lost to time' until being found by a historical preservationist.

A letter written by Founding Father Thomas Jefferson that had been lost to historians for over a century has surfaced.

The letter, which is priced at $80,000, is up for sale at Ardmore, Pa.-based historical document dealer Raab Collection.

Written in the final year of Jefferson’s life, the letter reveals his vision for how America would change human history. Part of a long-time correspondence with politician and orator Edward Everett, Jefferson wrote the letter at his Monticello home on July 21, 1825.

Specifically, Jefferson highlights the importance of the battle of Bunker Hill, which was fought on June 17, 1775, during the early stages of the Revolutionary War.

The letter from Thomas Jefferson to Edward Everett. (The Raab Collection)

“I am very thankful to the Bunker Hill monument association for the honor they have done me in electing me an honorary member of that institution. The occasion [the first great battle of the Revolution], which has given birth to it, forms an epoch in the history of mankind, well worthy of the splendid ceremonies with which its first stone was lately laid and consecrated,” Jefferson writes. “The coincidence of circumstances too was truly fortunate, which permitted it to be laid by the hand of one so illustrious [the Marquis de Lafayette] in his participation of the toils and dangers which followed the event it signalizes.”

More than 100 American troops were killed and 300 wounded in the battle, which ended in a British victory.

REMAINS OF US REVOLUTIONARY WAR FRIGATE DISCOVERED OFF UK COAST

However, over 1,000 British troops were either killed or wounded in the engagement. The high British casualty count proved the fighting abilities of American forces, which had been grossly underestimated by the British prior to the battle.

The Marquis de Lafayette, a French aristocrat, was a celebrated commander of American forces during the Revolutionary War.

The letter was published in the 1880s, but the original has been “lost to time” until now, according to the document dealer.

“This is a remarkable letter of Jefferson on the importance of independence not only to the United States but all people around the world,” said Nathan Raab, principal of the Raab Collection, in the blog post.

Jefferson, the third president of the United States, died on July 4, 1826.