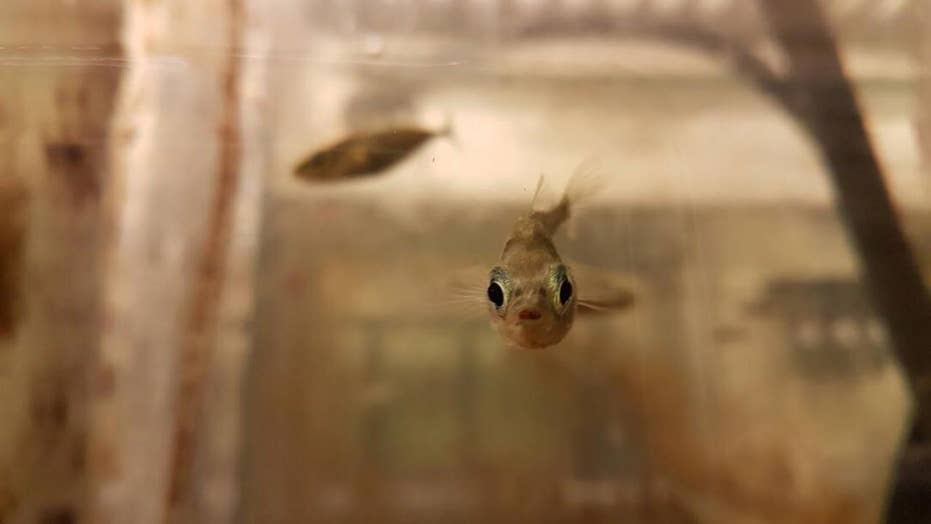 Virgin birth: Fish turned evolution upside down and got pregnant with no help

A female stickleback fish nicknamed 'Mary' somehow got pregnant without having a male fish fertilize her nest of eggs. It was the first time such embryos were birthed successfully and lived to adults.

A little stickleback fish (Gasterosteus aculeatus) nicknamed "Mary" appears to have leaped across a major reproductive divide on the evolutionary tree of life. Stickleback females, like most female fish, lay unfertilized eggs that males then fertilize in the nest. But Mary, somehow, got pregnant with healthy live young, which survived delivery via C-section.

This is the third time that scientists have found an unfertilized egg-laying fish with developing embryos in her belly, the researchers reported in a paper published yesterday (Feb. 20) in the journal Nature Scientific Reports. But it's only the first time that those embryos were birthed and developed into healthy adults.

"Although this almost accidental find revealed a vanishingly rare phenomenon, it might help us to understand a really important change that has happened throughout the tree of life," Andrew MacColl, an evolutionary biologist and part of the team at the University of Nottingham in England that made the discovery, said in a statement. "Most animals lay eggs, but some (including almost all mammals, but few fish) retain their eggs inside and give birth to live young. Although this appears to be a difficult thing to achieve in evolution, this one little fish seems to have got there almost by itself." [Photos: The Freakiest-Looking Fish]

Researchers aren't sure exactly how Mary, who is now dead, ended up pregnant this way, given that sticklebacks like her don't have sex with each other. One possibility was that she had cloned herself, and another was that she was a hermaphrodite and so had fertilized her own eggs. But genetic analysis revealed that her babies had two separate parents.

Their best guess is that Mary wandered into a nest where a male had recently ejected a bunch of sperm to fertilize normal, loose eggs that were already there. Somehow, a bit of that sperm must have traveled up Mary's egg tube and fertilized the un-laid eggs inside her.

While the resulting embryos were healthy, it probably wasn't a very good experience for Mary. When researchers found her (as part of existing research into egg-bound sticklebacks in Scotland), she was so swollen with her young that she was "close to death," they reported.

The researchers euthanized Mary with drugs before "destroying her brain" according to animal welfare regulations. Then, they opened her up and extracted her eggs, 56 of which survived till adulthood in a laboratory aquarium. Twenty are still alive three years later, according to the researchers.

Part of what makes the find so remarkable, the researchers said, is that under normal circumstances stickleback fathers play a necessary role in egg development beyond providing sperm. After taking over a nest of eggs, the fathers fan them with their fins as the eggs develop, stimulating healthy development processes. Something about the environment inside Mary seems to have done that job just as well. [The 7 Biggest Mysteries of the Human Body]

One of the two previous examples of fish found in this condition was also a stickleback in the 1950s, though its embryos were not delivered and little is known about how they formed. According to the statement, these researchers are now "actively looking" for more sticklebacks in similar situations during their expeditions to the waters of Scotland.

If they find more examples, it's a big deal. Various animals, including several fish, are known to have independently developed the ability to give birth to live young. Perhaps, this is a window into how that evolutionary leap happens.