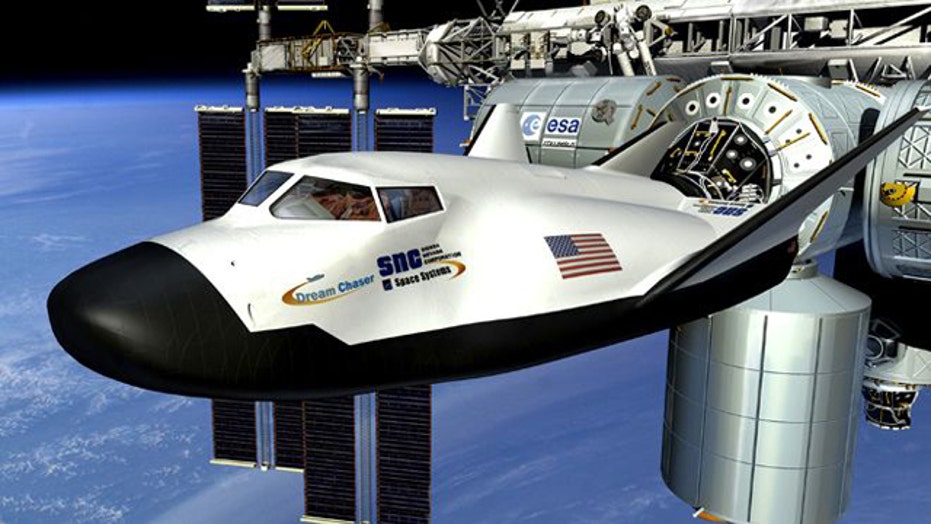 Allison Barrie on how the new US space race has taken a big step closer to launching astronauts from America within five years.

America is a giant leap closer to developing a new, made-in-the-USA spacecraft to launch astronauts into space once again.

The Dragon capsule from Space Exploration Technologies (SpaceX) returned successfully from the first private cargo mission in Oct. 2012, making it a clear leader in the race to build a spacecraft suitable for humans. But oddsmakers are scrambling to revise the leaderboard: Lockheed Martin just announced it would join forces with Sierra Nevada to build the competition, the futuristic Dream Chaser.

The Dream Chaser is the only spacecraft with wings. It can carry as many as seven astronauts to space and is designed to land on a conventional runway.  Along with the CST-100 capsule from Boeing, these three shuttles are locked in a race to bring manned spaceflight back to the U.S.

'Lockheed Martin has joined our Dream Chaser team ... [now] how do we get this vehicle really fit to fly safely?'

In this competition, formally known as the Commercial Crew Program (CCP) initiative, NASA partners with the private sector to leverage the Agency’s five decades of human spaceflight experience against private sector experience and innovation.

Since the launch of this challenge at the close of the space shuttle program, American companies have been competing to restore human spaceflight capabilities to the U.S. with a safe, reliable and cost-effective means into and out of low-Earth orbit for government and commercial customers – in a way, a space taxi.

With the end of the Space Shuttle program, the U.S. lost its own transportation capabilities to the International Space Station. Once CCP is achieved, Americans will no longer have to rely on the expensive lift from Russia’s Soyuz rockets.

Space Taxi or Lifeboat
The teams are competing to create a system that will deliver equipment and a minimum of four astronauts to the space station and return them to Earth at least twice a year.

In the event of an emergency on the launch pad, during launch or ascent, the competing teams must have solutions to assure crew safety.

If there is an emergency while in space, the spacecraft must be able to serve as a 24-hour safe haven, sort of like a space lifeboat.  It also needs to be able to stay docked to the station for at least 210 days.

Of the three designs, NASA will ultimately choose its favorite for ferrying American astronauts to and from the International Space Station, but the end result could be more than one spacecraft to provide safe, reliable and less expensive space access.

Roadmap to Space
These three companies are now beginning the first phase of the certification efforts to confirm their commercial spacecraft is safe to carry crews to the station.

During Phase 1 -- which is expected to last about 15 months from Jan. 22, 2013, through May 30, 2014 -- NASA and the companies will establish that each spacecraft, launch vehicle, ground operations and mission control center meet flight safety and performance requirements.

Phase 2 next year will mark the start of final development, building, verifying and validating the systems are ready to fly astronauts by 2017.

Dream Chaser, for example, completed its helicopter drop test in late 2012 and has a suborbital test scheduled for this year and an orbital test in 2014. SpaceX is planning for a pad abort test and in-flight abort test, while Boeing will be verifying its spacecraft and launch vehicle compatibility.

Moon and Beyond
Providing the CCP program is successful, NASA will then become a customer using the new spacecraft to transport American flight crew to the International Space Station to continue their critical science research.

While NASA is working with the private sector for low-Earth orbit International Space Station cargo re-supply and crew transportation, NASA has retained responsibility for travel beyond the moon.

As the lead in deep-space exploration, the agency is developing the Orion spacecraft crew capsule and the heavy lift rocket Space Launch System (SLS).

SLS and Orion will provide an entirely new capability for human exploration beyond low-Earth orbit and make new exploration missions of the solar system possible, the agency says.