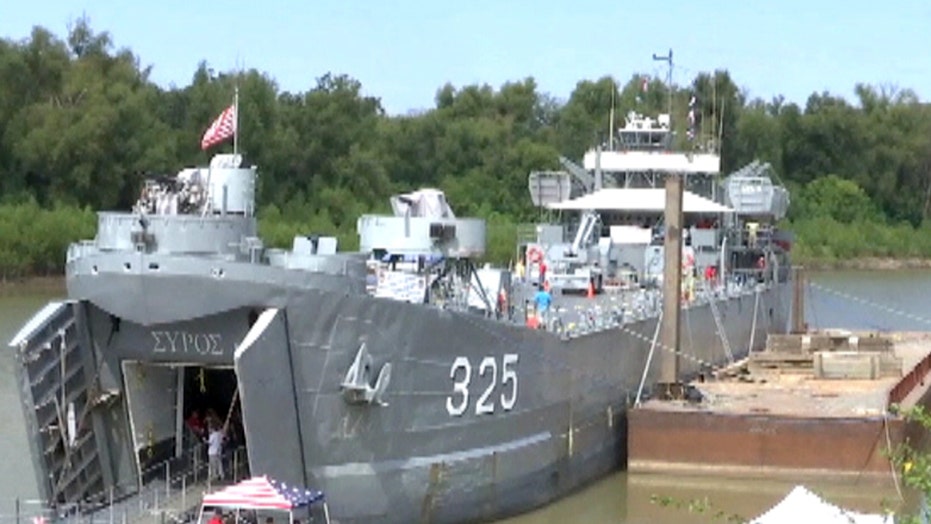 Over 70 years have passed since the Allied forces stormed Omaha Beach in Normandy, France during World War II, but a historic relic from that time still lives on. The USS LST 325, a landing ship commissioned on February 1, 1943 participated in battle operations on D-Day, June 6th 1944, carrying vehicles, soldiers, tanks and equipment.

“This was such an important part of the war effort, Churchill himself said this is the ship that won the war,” Kubota said. “They were able to get them not only just the tanks but all the other necessary material that goes to fighting a modern war.”

Although he did not serve in the armed forces, Kubota has a strong family connection to the war. Kubota’s father, a Japanese-American born in the United States, was first placed in an internment camp, then paroled to work the crops to fill the labor shortage caused by the war, before being drafted to serve as a Master Sergeant during WWII.

“It was always a sore subject with him obviously and I’m very much aware of that, even today,” said Kubota.

Irwin Kuhns, a WWII veteran and member of the current LST 325 crew, served as a U.S. Navy Coxswain in the Pacific. Kuhns helped deliver supplies aboard Higgins boats, which are smaller supply vessels used to deliver troops ashore. After celebrating his 90th birthday in April of 2016, Kuhns says he can still vividly recall his life during the war.

“I spent many hours out there in my Higgins boat doing these runs back and forth with the different ships. Bringing in supplies, bringing in fresh troops and taking out the ones that aren’t too fresh,” said Kuhns.

Kuhns says he enjoys meeting visitors and veterans alike aboard the LST 325 but he often gets emotional while talking about the war.

“I can’t sing the Star Spangled Banner or pledge allegiance to the flag because I get a lump here. I mouth it. I cannot say it,” he added.

The 328-foot-long and 50-foot-wide ship was not always in working condition.  After the war, the USS LST 325 was decommissioned and then reactivated for Artic Sea operations, according to the USS LST 325 Memorial Museum. It was officially removed from the U.S. Navy’s list in September of 1961 and then transferred to Greece three years later. The ship remained in the Greek Navy as Syros (L-144) until 1999.

Robert “Bob” Jornlin, a Vietnam War veteran who served during the Cuban Missile Crisis as an engineering officer aboard an LST class ship, was part of the team that helped recover the ship from a Greek shipyard in 2000.

“I had a crew member find it and Greece said we could have it,” said Jornlin. “It took four years to go through our government to get it given to us, and all we had to do was go 6,500 miles over to the island of Crete and get her out of the junk yard, put her back together, get her running [and] sail her home.”

Jornlin says he and the crew of WWII and Korean War Veterans paid their own way in order to bring the ship back home and ran into a bit of red tape along the way.

“We couldn’t come back, [and] couldn’t get it registered as an American ship even though it was made in Philadelphia and went through the whole [of] WWII,” said Jornlin. “So we had to come back unregistered which is a pirate ship basically.”

Volunteer and WWII Veteran Jack Stephenson says the ship is the last of its kind that is fully operational out of thousands that were constructed by the U.S. government.

Although no members of the current crew of veterans and volunteers served aboard the LST 325, the legacy of the ship is kept afloat year round. Ken Frank, president of the museum, says the majority of the $250,000 it cost to operate is collected from admission fees, donations, and gift shop sales.  He also added that a small portion of funds are collected through membership fees.

Tours of the ship take place all year while the ship is docked in Evansville, Ind. and during visits to other American cities once a year. This year the ship and her crew set sail for Cape Girardeau, Mo. and Vicksburg, Miss.