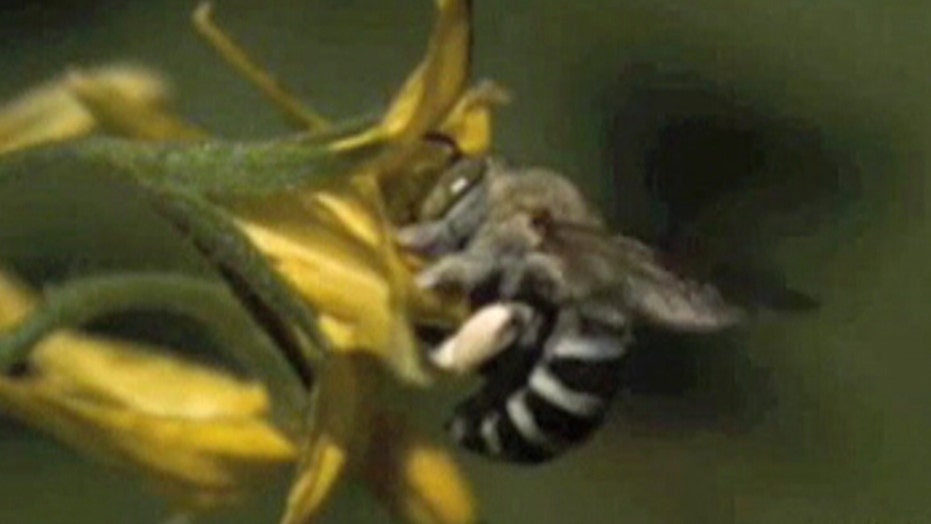 If there was a heavy metal rock fan in the natural world, it would have to be the Australian native blue banded bee.

As you can see from this video, this bee with its distinctive black and blue stripes is a head banger. But rather than jamming to the latest Metallica song, this is actually the bee’s unusual approach to pollination. It uses its head to shake loose the pollen, a contrast to the conventional methods of brushing up against flowers so the pollen stick to the hairs of a bee.

"I initially though it was one bee doing something weird, so I went back the next day to try to get some up-close videos of the bees," Harvard’s Callin Switzer told FoxNews.com. "When I looked at those videos, I spent a bunch of time trying to figure out why they would behave so differently. Then I immediately though about putting some music in the background and making a silly video to share with my colleagues!"

To the naked eye, it's almost impossible to see the head banging - since its done up to 350 times a second. This video, however, slows things down so you can see the violent head shaking and how this technique causes vibrations that release the pollen into the air – which helps pollinate the flower.

While their American counterparts grabbed the anther of the tomato plant flower with their mandibles before tensing their wing muscles to shake the pollen out, super slow motion footage revealed the bee from down under prefers a “hands-free” approach.

And by recording the audio frequency and duration of the bees’ buzz, RMIT’s Sridhar Ravi, Switzer and the University of Adelaide’s Katja Hogendoorn were able to prove the Aussie bee vibrates the flower at a higher frequency than overseas bees and spend less time per flower.

But it remains a mystery why the bees take this approach.

"I can't explain why they use this behavior, though I have a few guesses," Switzer said.

"Maybe their mandibles are too small or too weak to hold onto the anther while vibrating at 350 Hz. Maybe the impact forces actually loosen pollen better than the relatively smooth motion that would occur if they grasped the anthers with their mandibles," he said.  "I also don't know if they're alone in this behavior -- I think that question is really hard to answer, since it's not a behavior you can see with your naked eye."

The researchers said they were “absolutely surprised” by the findings and argued the results, which will soon appear in the journal Arthropod-Plant Interactions, could open the door to improving the efficiency of certain crop pollination as well as better understanding of such things as muscular stress and the development of miniature flying robots.

Related: Study shows popular pesticide hurting health of wild bees _ not honeybees _ out in the field