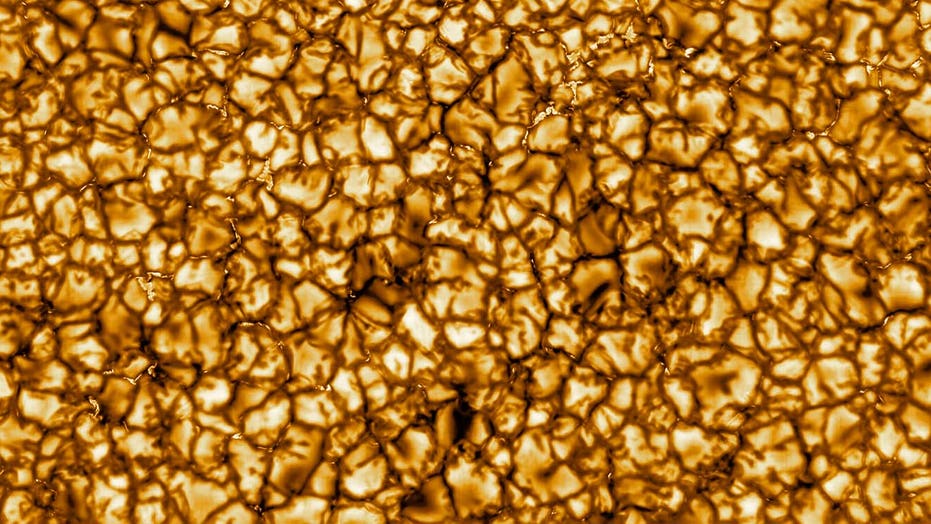 The National Science Foundation telescope, which is on the summit of Haleakala, Maui, is giving scientists new insight into the Sun. “The images show a pattern of turbulent ‘boiling’ plasma that covers the entire Sun,” said the National Science Foundation, in a statement. “The cell-like structures — each about the size of Texas — are the signature of violent motions that transport heat from the inside of the Sun to its surface.”

Scientists say that the telescope will boost our knowledge of how solar storms, for example, impact Earth. Solar, or geomagnetic, storms are disturbances in Earth’s magnetosphere or magnetic field caused by changes in solar wind. The largest of these storms are associated with solar coronal mass ejections (CMEs), huge expulsions of plasma and magnetic field from the Sun’s corona, or outer atmosphere.

A cropped section of the Inouye Solar Telescope’s first light image of the Sun's surface. (NSO/AURA/NSF)

“Since NSF began work on this ground-based telescope, we have eagerly awaited the first images,” said France Córdova, NSF director, in the statement. “We can now share these images and videos, which are the most detailed of our Sun to date. NSF’s Inouye Solar Telescope will be able to map the magnetic fields within the Sun’s corona, where solar eruptions occur that can impact life on Earth. This telescope will improve our understanding of what drives space weather and ultimately help forecasters better predict solar storms.”

Scientists have been learning more about Earth’s star in recent years. In the early hours of Aug. 12, 2018, NASA’s Parker Solar Probe blasted off from Cape Canaveral Air Force Station atop a United Launch Alliance Delta IV rocket on its audacious journey to the Sun.

The $1.5 billion mission has taken humanity closer to the Sun than ever before and the probe is helping scientists shed new light on the star.

This image captured by the Daniel K. Inouye Solar Telescope in Hawaii is the highest-resolution image of the Sun's surface ever taken, according to the National Science Foundation. (NSO/AURA/NSF)

On its closest approach in 2024, the probe will be traveling at approximately 430,000 mph, setting a new speed record for a man-made object.