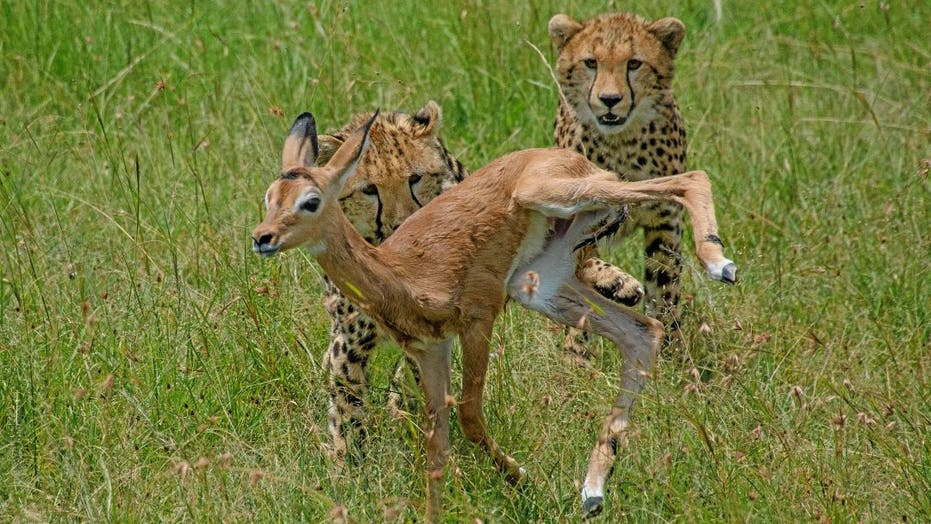 This gives new meaning to the phrase, "more than meets the eye."

Several images of a pack of cheetah cubs running with an impala calf are more than they're letting on, British news agency SWNS reports.

Though the images appear to show the four mammals running and playing, a closer inspection reveals the mother cheetah separated the impala calf from its own mother, using the calf as a hunting lesson for the young cubs. Luckily for the impala, the cheetah cubs do not yet have the killer instinct, wildlife photographer, Kurt Mueller said.

These apparently playful images show cheetah cubs practicing how to hunt using an impala calf after it was separated from its mother in the Olare Motorogi Conservancy, Masai Mara, Kenya. (Credit: Kurt S Mueller, SWNS)

PENGUINS ARE BEING ENTERTAINED WITH BUBBLE MACHINE BECAUSE OF CORONAVIRUS PANDEMIC

“We chanced upon a cheetah mother with three cubs one evening," Mueller, 75, said of the photos that were taken at the Olare Motorogi Conservancy in Kenya, adding that the cheetah mother began to start looking at the group of impalas.

"We expected to see a chase that would separate the mother from the baby, which would provide an insignificant meal for the cheetahs," Mueller continued. "However, once the calf was split from its mother, a lot more happened. The cheetah mother had planned to use the occasion for her three cubs to develop their hunting and killing instincts, by allowing them to interplay with the calf."

The exchange between the cubs and the baby impala got rougher by the moment. The calf looked for cover shortly after it started, Muller said, but it was unable to find any until after the two species had been "playing" for some time.

The cheetah mother and her 3 young cubs were spotted in the Olare Motorogi Conservancy, Masai Mara, Kenya by a traveling group of photographers. (Credit: Kurt S Mueller, SWNS)

Though the interaction was an "emotional roller coaster" for Mueller and the others in the group, no harm was done to the impala.

"The novelty of having a new member within the cheetah family, an antelope less than a day old, resulted in these amazing displays between inexperienced predators and innocent prey," Mueller explained. “Sometimes funny, sometimes tragic, it was clear what the outcome would be. Lucky for us, the animals disappeared deeper into the bush for the final moments.”

Upon splitting the calf up from its mother the Cheetah used the opportunity to teach her cubs how to hone their hunting skills. The sweet cubs, not yet possessing the killer instinct that they will grow to have do not instantly kill the calf and instead play with it, leading to a few frames where it simply appears that the impala has made a few furry friends who have adopted it into their pack. (Credit: Kurt S Mueller, SWNS)

The Olare Motorogi Conservancy, located in Masai Mara, Kenya, was established in May 2006, according to its website. It has a number of different species on its more than 35,000 acres, including "the highest concentration of big cats anywhere in Africa."