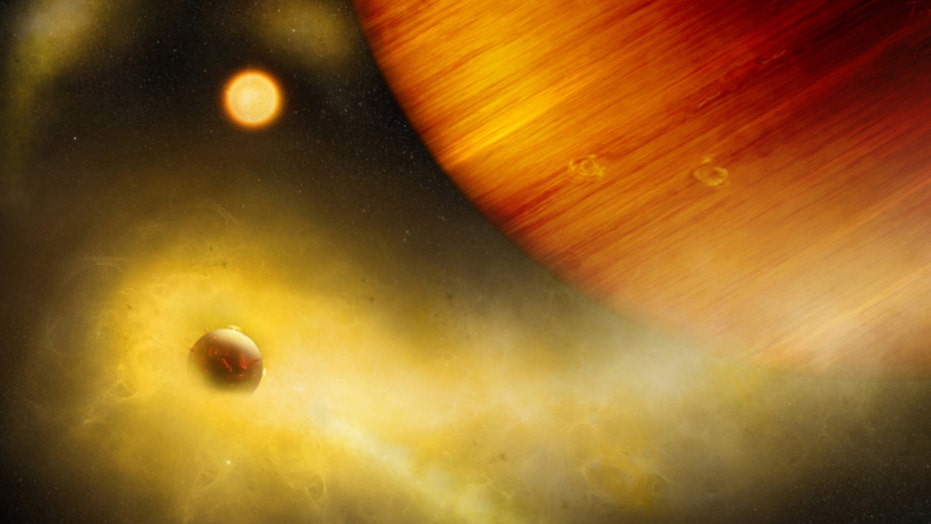 Researchers believe they have discovered what they describe as "the first volcanically active exomoon," a celestial body eerily reminiscent of the tiny, fiery "Star Wars" planet, Mustafar, where Anakin Skywalker turned into Darth Vader.

Potentially located in the WASP-49b exoplanet system, approximately 550 light-years away from Earth, the hypothetical exomoon has been compared to 55 Cancri-e, a Super-Earth that has a surface temperature greater than 3,000 degrees Fahrenheit. It has also been compared to Jupiter's moon, Io, the most volcanically active celestial body in the solar system.

“It would be a dangerous volcanic world with a molten surface of lava, a lunar version of close-in Super Earths like 55 Cancri-e” said University of Bern researcher and the study's lead author, Apurva Oza, in a statement.

Artist's composition of a volcanic exo-Io undergoing extreme mass loss. The hidden exomoon is enshrouded in an irradiated gas cloud shining in bright orange-yellow, as would be seen with a sodium filter. Patches of sodium clouds are seen to trail the lunar orbit, possibly driven by the gas giant's magnetosphere. (Credit: University of Bern, Roger Thibaut)

The study, which will be published in The Astrophysical Journal and is available online here, notes that "extrasolar satellites are generally too small to be detected by nominal searches."

However, it adds that WASP-49b's atmosphere contains the presence of sodium at an exceptionally high altitude, leading Oza to believe it's emanating from somewhere other than the exoplanet.

“The neutral sodium gas is so far away from the planet that it is unlikely to be emitted solely by a planetary wind,” the researcher said.

He added the conditions could be “a place where Jedis go to die, perilously familiar to Anakin Skywalker.”

In "Star Wars: Revenge of the Sith," Skywalker fights his mentor, Obi-Wan Kenobi, in a gruesome battle. The fight leaves him horribly disfigured and near death, but Skywalker is rescued and ultimately becomes the iconic Darth Vader.

Although the researchers have not confirmed the presence of the exomoon and concede the sodium gas could be caused by a ring of ionized gas surrounding the exoplanet, they're still hopeful.

STRANGE GIANT PLANET 'UNLIKE ANY OTHER' DISCOVERED

“While the current wave of research is going towards habitability and biosignatures, our signature is a signature of destruction“, Oza said. "A few of these worlds could be destroyed in a few billion years due to the extreme mass loss. The exciting part is that we can monitor these destructive processes in real time, like fireworks.”

Scientists have yet to concretely say that exomoons exist, but in October 2018, NASA's Kepler and Hubble space telescopes spotted evidence of a Neptune-size satellite orbiting exoplanet Kepler-1625b.

In June, an astrophysicist at the U.K.'s University of Lincoln posited that exomoons could contain liquid water and, therefore, support life.

So far, more than 4,000 exoplanets have been discovered, but the potential list of exomoons is far smaller. According to Space.com, there could be as many as 100 exoplanets that have exomoons. By comparison, there are more than 150 moons for just the eight planets in the solar system, according to data compiled by NASA.