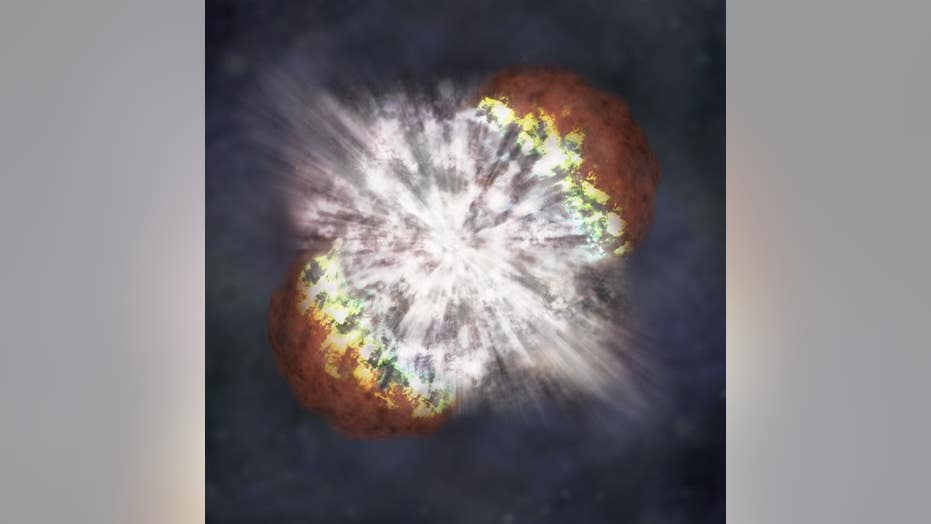 An exploding star that blazed to life 240 million light-years away in the Perseus constellation may have consumed its dead neighbor, new research shows.

Although the blast, officially known as SN 2006gy, grew brighter and measured hundreds of times more powerful than a typical supernova, scientists were unsure what characteristics made the incident so unique.

A bright supernova flares across the sky in this illustration. (Science Photo Library - MEHAU KULYK via Getty Images)

In new research published Thursday in the Science journal, astronomers analyzed for a second time the emission lines emanating from the explosion.

The astronomers found large deposits of iron in the emissions, Live Science reported, which they believe could be the result of the supernova interacting with a different layer of stellar material that was ejected hundreds of years earlier.

Researchers have one theory that SN 2006gy actually began with two stars, not one.

"A candidate scenario to explain this is [the] evolution of a binary progenitor system, in which a white dwarf spirals into a giant or supergiant companion star," the researchers wrote in the study.

This NASA illustration shows what the super-luminous supernova SN 2006gy may have looked like.

A collision among stars that orbit around one another would reportedly be quite rare, happening once every 10,000 years or so in the Milky Way.

Since scientists have never seen two stars merging, the explanation is, for now, purely mathematical.