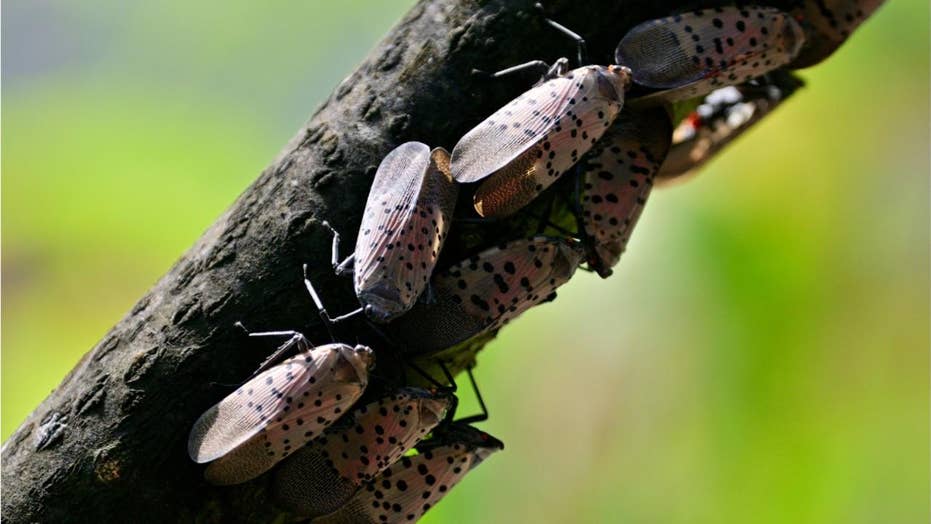 ‘Most destructive insects in 150 years’ invade Virginia and Pennsylvania

Insects are invading Virginia and Pennsylvania and could be ‘the most destructive species in 150 years.’

An invasive insect species native to China, India and Vietnam is posing a problem in at least two states.

The spotted lanternfly is harming crops in Winchester, Virginia, WDVM reported. The Pennsylvania-based Churchville Nature Center said the creatures were also spotted for the first time on its property Thursday.

AVOCADOS MIGHT NOT BE 'VEGAN' DUE TO MIGRATORY BEEKEEPING

"We are sad to report that we have had our first sighting of the spotted lanternfly on our property today," the center announced on Facebook. "If it is new to you, this invasive plant hopper is threatening the forests of the northeast as well as the lumber and agricultural industries. Please keep an eye out for the insect."

The species poses a threat to agriculture and “has the ability to greatly impact the grape, hops and logging industries,” the Pennsylvania Department of Agriculture warned.

“The insect causes damage to plants because of its method of feeding, the rapid buildup of large populations and the production of honeydew, a by-product of their feeding activity that serves as a medium for fungal growth. [Spotted lanternfly] can also be a nuisance pest to homeowners when found in large numbers,” the Virginia Department of Agriculture and Consumer Services said in a statement when the species was first detected in the state in February.

While these insects aren't known to harm humans, the pests raise concerns ahead of the holiday season. Spotted lanternflies may lay their eggs on Christmas trees which could then hatch inside homes, the Philly Voice reported.

Freshly laid eggs “have a grey mud-like covering which can take on a dry cracked appearance over time,” the Pennsylvania Department of Agriculture said, encouraging anyone who sees the masses to scrape it off.

Any sightings of spotted lanternfly eggs, which can be killed with alcohol or hand sanitizer, should be reported to state wildlife officials.