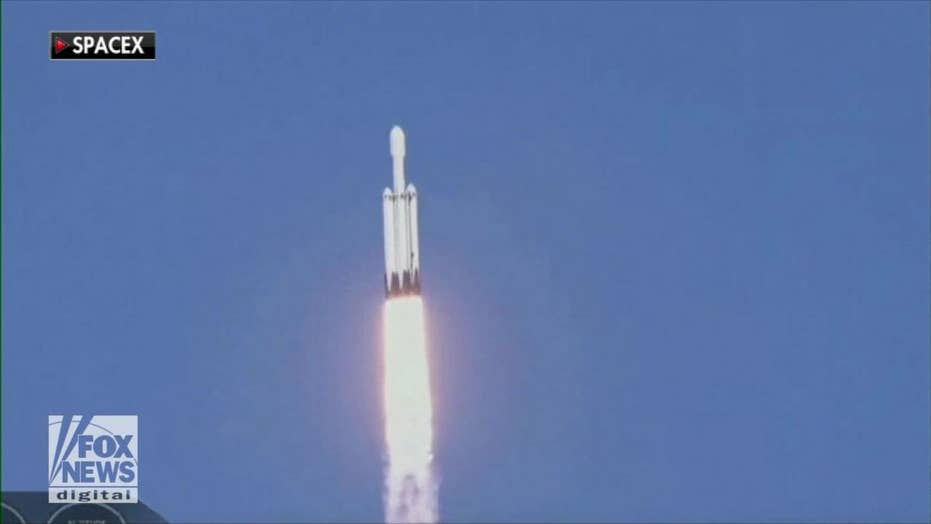 SpaceX successfully launched its new and improved Falcon Heavy rocket from NASA’s Kennedy Space Center Thursday, more than a year after sending up a "red Roadster" in its initial test flight.

The updated Falcon Heavy is now the world's most powerful operation rocket with 27 engines firing at liftoff. It launched into the sky Thursday evening with Arabsat-6A, a Saudi Arabian satellite built by Lockheed Martin and operated by Saudi Arabia.

Eight minutes after liftoff, SpaceX landed two of the first-stage boosters back at Cape Canaveral, side by side, just like it did for the rocket's debut last year. The core booster landed two minutes later on an ocean platform hundreds of miles offshore -- the only part of the first mission that missed.

Eight minutes after liftoff, SpaceX lands two of the first-stage boosters side by side at the Kennedy Space Center in Cape Canaveral, Fla., Thursday, April 11, 2019.  (AP)

SpaceX chief Elon Musk warned in advance things might go wrong, given the upgraded version of the rocket with unproven changes. But everything went exceedingly well and the satellite ended up in the proper orbit.

"The Falcons have landed," Musk said in a tweet that included pictures of all three boosters.

NASA offered swift congratulations, tweeting: "From our iconic launch pads at @NASAKennedy, we will continue to support the growing commercial space economy.”

Musk put his own Tesla convertible on last year's demo. The red Roadster — with a mannequin, dubbed Starman, likely still at the wheel — remains in a solar orbit stretching just past Mars.

SpaceX plans to launch its next Falcon Heavy later this year on a mission for the U.S. Air Force. The boosters for that flight may be recycled from this one.

NASA Administrator Jim Bridenstine last month suggested possibly using a Falcon Heavy — and another company's big rocket — to get the space agency's Orion capsule around the moon, minus a crew, in 2020.

Bridenstine said everything is on the space table as NASA strives to meet the White House's goal of landing astronauts back on the moon by 2024.