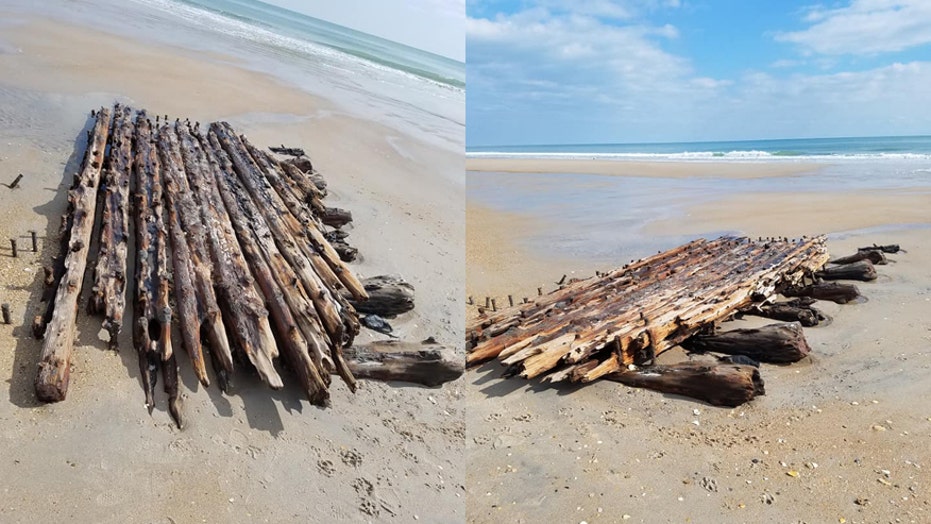 A shipwreck linked to a mutiny and murder mystery has emerged from the sands of a North Carolina beach.

Mimi Farrell posted images of the ghostly wreck on the beach at Surf City on Facebook on Jan. 28.

“Fascinated with seeing this shipwreck. This is the most I have seen of it and it's still larger,” she wrote.

Farrell subsequently told Fox News that the wreck is the William H. Sumner, which ran aground on Topsail Island in 1919. Most of the time, the wreck is covered by sand, she explained.

The News & Observer reports that the William H. Sumner ran aground after an alleged mutiny.

The wreck appeared on the beach at Surf City, North Carolina. (Mimi Farrell)

The cargo schooner was traveling from Puerto Rico to its homeport of New York when it met its end, according to the Topsail Island Blog.

“The speculation is that the crew had asked the Captain to detour to pick up supplies and the Captain wishing to head northward to port would not,” the blog explains. “The crew then allegedly mutinied the captain and to their fear, ran aground at Topsail Inlet.”

The blog says that the body of the ship’s captain was found in a pool of blood, with gunshot wounds “apparently self inflicted over the despair of losing the vessel on his maiden voyage." However, a jury appointed by the Pender County coroner was unwilling to accept that the skipper’s death was the result of suicide.

Citing articles on TreasureNet.com, the News & Observer reports that seven of the ship’s eight crew members were tried for murder, but the jury failed to reach a verdict.

The wreck is the William H. Sumner, which ran aground on Topsail Island in 1919. (Mimi Farrell)

Other North Carolina shipwrecks have been garnering attention. In October 2019, for example, a mysterious shipwreck emerged on a Hatteras Island beach in the wake of a storm before being swallowed up by the sand.

Earlier in 2019, the creepy skeleton of an 86-year-old shipwreck was also revealed by the shifting sands of Hatteras Island. The Cape Hatteras National Seashore posted an image of the wreck on Facebook June 1. The wreck is the G.A. Kohler, a four-masted schooner that became stranded on Hatteras Island in August 1933.