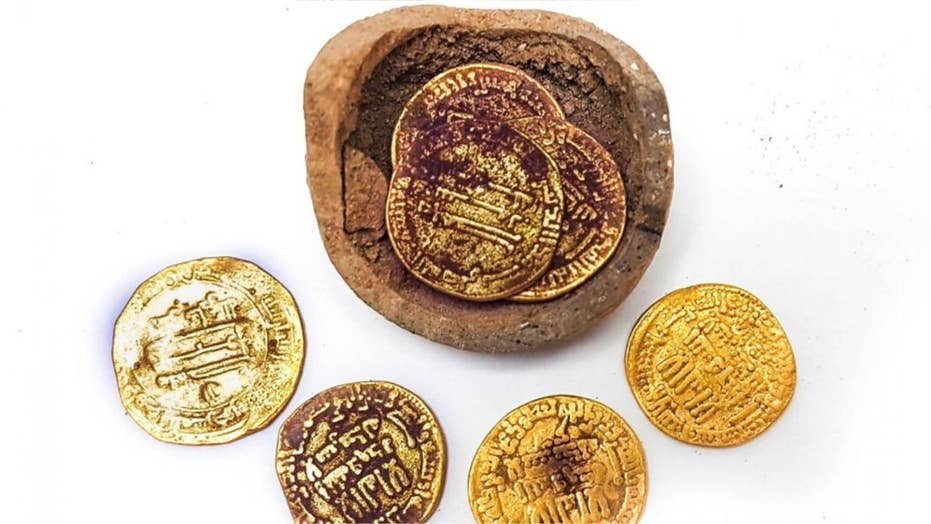 Archaeologists in Israel have uncovered a plethora of 1,200-year-old gold coins stashed in a clay jug in the city of Yavneh, a find that has been described as “Hanukkah Gelt” given its close proximity to the Jewish holiday.

The Israeli Antiquities Authority (IAA), which issued a release surrounding the findings, said the archaeologists were "surprised" when they made the discovery. The IAA added that the area in which the discovery was made was an "ancient industrial area" that was active for several hundred years.

The archaeologists said in the release that the gold coins could have been "a potter’s personal 'piggy bank.'"

Robert Kool, a coin expert at IAA, said one of the coins appears to date to the 8th or 9th century, between 786 and 809 A.D., during the reign of Caliph Harun al-Rashid. The famous “Arabian Nights” collection of stories, also known as “One Thousand and One Nights” is based on al-Rashid.

“The hoard also includes coins that are rarely found in Israel,” Kool added. “These are gold dinars issued by the Aghlabid dynasty that ruled in North Africa, in the region of modern Tunisia, on behalf of the Abbasid Caliphate centered in Bagdad."

The archaeologists also found that the excavation revealed "an unusually large amount of pottery kilns," which were used for commercial production of jars, cooking pots and bowls.

In another part of the dig site, a wine production site was also discovered, related to the Persian period in the 4th to 5th century B.C. There were more wine vats found at the site than would have been needed for the city's inhabitants, suggesting that some of it may have been exported or consumed by people visiting the city.