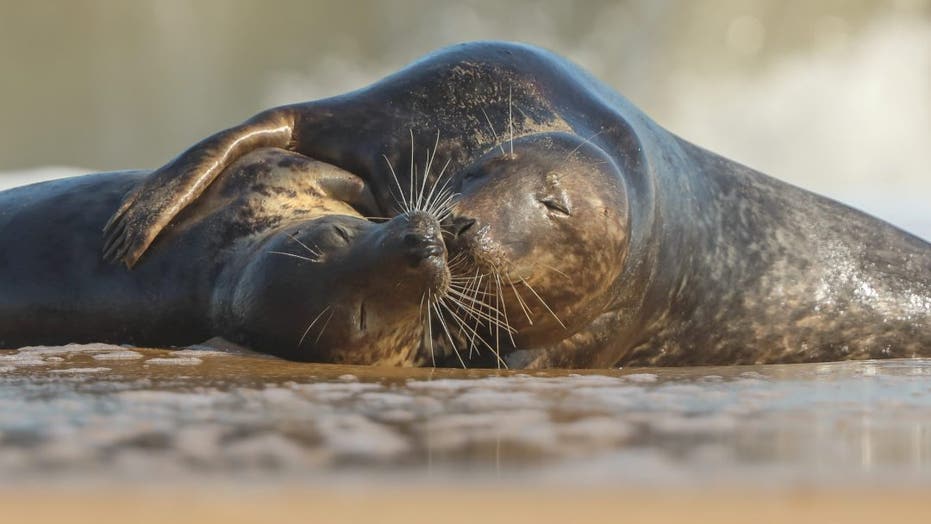 And they called it pup-py love.

A wildlife photographer has captured a tender moment with two seals embracing each other on a beach in England, reminiscent of a famous movie scene.

The photos were taken by amateur photographer Wayne Havenhand at Horsey Beach, in Norfolk, England, British news agency SWNS reports. Havenhand said the pictures of the embrace reminded him of the beach scene in the 1953 movie, "From Here to Eternity."

"It reminded me of that beach scene from the film 'From Here To Eternity', with Burt Lancaster," Havenhand said. "The bigger seal, which had its flipper draped over the other one, was really gentle and tender. They were just enjoying the moment, in their own little world. It was lovely to watch."

Havenhand said that he drove five hours from his home in Northumberland to Norfolk on Sept. 19, where he was lucky enough to spot the seals cuddling for at least 20 minutes.

These heartwarming photos show the moment a pair of loved-up seals enjoyed a little 'smooch' on the beach as the waves crashed behind them - like a scene from a film. (Credit: SWNS)

The site manager for a building firm added he hopes to make the trek again prior to the start of October, when the beach is closed off as seal pups are born following their mating season.

VIRAL PHOTO SHOWS SEAL 'HIDING' FROM CAMERA BEHIND ITS FLIPPER

In July, a wild seal was spotted off the English coast begging tourists for food, near the small naval port at Dartmouth, Devon, England.

One month later, a seal went viral after an amateur photographer snapped an image of the modest mammal covering its face with its flipper.