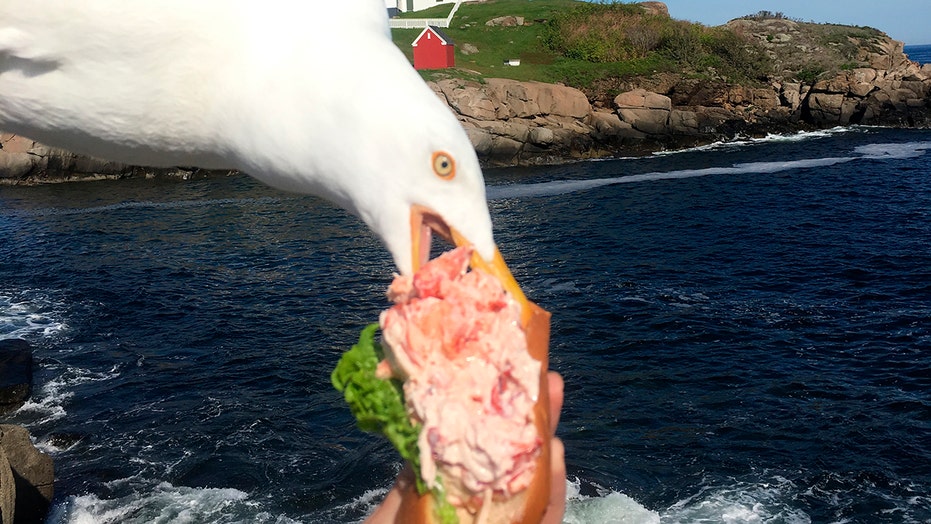 A woman visiting York, Maine this weekend to try her first-ever lobster roll learned that even the best-laid plans often go awry when a sly seagull swiped the delicacy right out of her hand — but not before capturing the moment in a wild photo.

Alicia Jessop, a 34-year-old Pepperdine University professor, intended to chronicle the first bite of her pricey sandwich with the perfect photo. Finding a scenic spot with the Nubble Lighthouse overlooking the sea in the background, she framed the sandwich to get the shot.

But then a seagull photo-bombed the shoot and stole the sandwich right out of her hand.

"I was really embarrassed. You hear stories of people taking crazy Instagram pictures and hurting themselves and I was like, 'Oh my God, you are now that person. You just wasted $21.50 for a picture,'" Jessop said.

Jessop later realized she had captured the heist in a photo and shared it to social media. (Alicia Jessop/@rulingsports via AP)

As she walked back to Fox’s Lobster House to get another $21.50 lobster roll, Jessop realized the only photo she had was the exact moment the seagull had swooped in and snagged the sandwich.

Jessop tweeted the photo, writing, "This is why we can't have nice things." The photo quickly went viral, garnering more than 200,000 likes.

Her second attempt to document her first-ever Maine lobster roll went much smoother. This time, she asked another customer to snap a photo as proof that she actually had the treat.

Jessop succeeded in trying a lobster roll on her second attempt.  (Alicia Jessop/@rulingsports via AP)

But Jessop said she was glad the lobster roll mishap brought some humor into her life and gave people a good laugh.

"There are a lot worse things I could be known for, and if that means I get free lobster rolls and bring a little bit of laughter into people's lives, I think that's a good thing," she said.