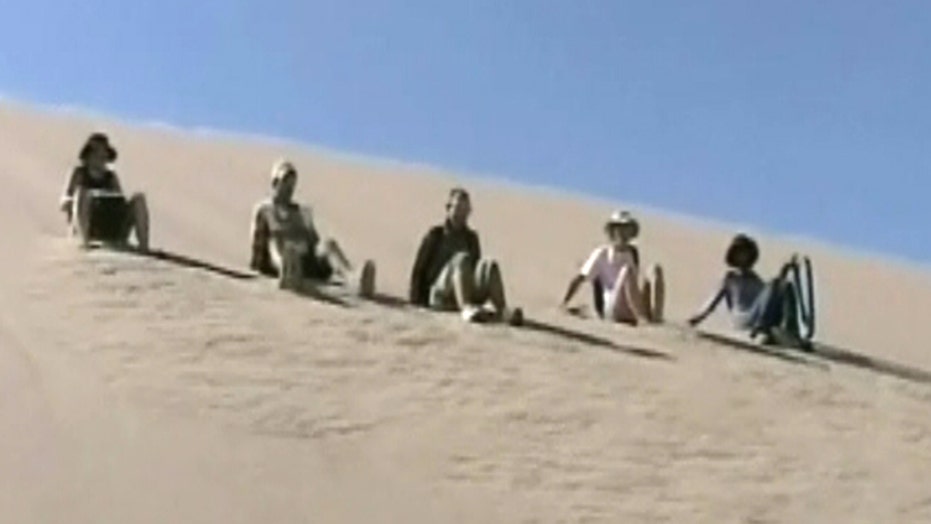 In his travel diaries, Marco Polo recounted how he often heard haunting sounds at night as he traveled through the Gobi desert.

Now, researchers studying sand dunes in Death Valley National Park and the Mojave Desert are starting to unravel the mystery behind those sounds that have been described over the centuries as moaning, roaring or squeaks. In a study in the journal Physics of Fluids, the researchers found they fell into two categories - short-lived burping sounds and longer-lived booms – and that found each corresponds to different waves that travel through the dunes.

"During approximately 25 individual summer field days, on very hot and sandy dunes in California, we probed booming dunes and they slowly revealed their underlying physics to us," said University of Cambridge’s Nathalie M. Vriend, who began the research into the sounds while a doctoral student at Caltech with Melany Hunt. The two co-authored the paper along with CalTech’s Rob Clayton.

"We measured the wave propagation characteristics, which include the motion of grains and frequency and energy of the emitted sound,” she said in a statement. “This, in turn, revealed that booming and burping are two different, but related, phenomena.”

Using geophones that pick up these vibrations, the researchers set about documenting the burping and booming sounds in the desert. Some of these avalanches happen naturally when the wind blows across the crest of a dune but the researchers also triggered their own mini avalanches by sliding down the dunes.

Related: An iconic Chilean desert is bursting with color

Vriend told FoxNews.com that the burping sounds turned out to be short-lived – lasting only a fraction of a second - and were only audible within a few meters. In contrast, the booming sounds were longer lasting and often could be picked up for a mile or two.

The researchers also found the booming sound is persistent and the dunes "sing" in frequencies ranging from 70 to 105 Hertz –  a wide range that often is a result of environmental conditions such as moisture in the dunes. The burping sounds were observed from 50 to 150 Hertz and often dependent on the size particles and speed of moving sand.

Creating a boom by sliding in unison down the face of a sand dune on the 200 m high Eureka Dune in Death Valley National Park, California. (Nathalie M. Vriend)

“By looking at the signals measured by these geophones, we were able to distinguish between the burping and booming phenomena and we were able to understand the relation and difference between those,” Vriend said.

“The most revealing thing was that when we created this short lived burp and when it evolved to a loud, far reaching boom, we measured the signal and discovered that both signals which are responsible for each emission are present in both measurements,” she continued. “But for the burping, we have a different signal that is dominant compared to the booming.”

The researchers also identified a mechanism for these differences. They found that the short-pulsed burps resulted from waves closer to the surface known as Rayleigh waves, while the booming sounds came from P waves that are faster and move through the dune.

Vriend said the “driving force” in doing this research was the opportunity to solve this “longstanding mystery.”

But she said there may be practical benefits of better understanding these sounds – that in earlier research by Vriend and her colleagues were found to be present in some 40 desert regions around the world.

“There are possible environmental benefits of my work, both from the sound and the avalanche point of view. For example, think about a wider understanding of the wave propagation through a granular material, which could help probing the subsurface of sandy substrates, or progress the prospecting of oil and gas reserves in desert regions,” she said.

“Furthermore, dune migration is a very critical threat to downwind communities who are at risk for dune encroachment; my work adds knowledge about the structure of desert dunes which could help to slow this down,” she added.