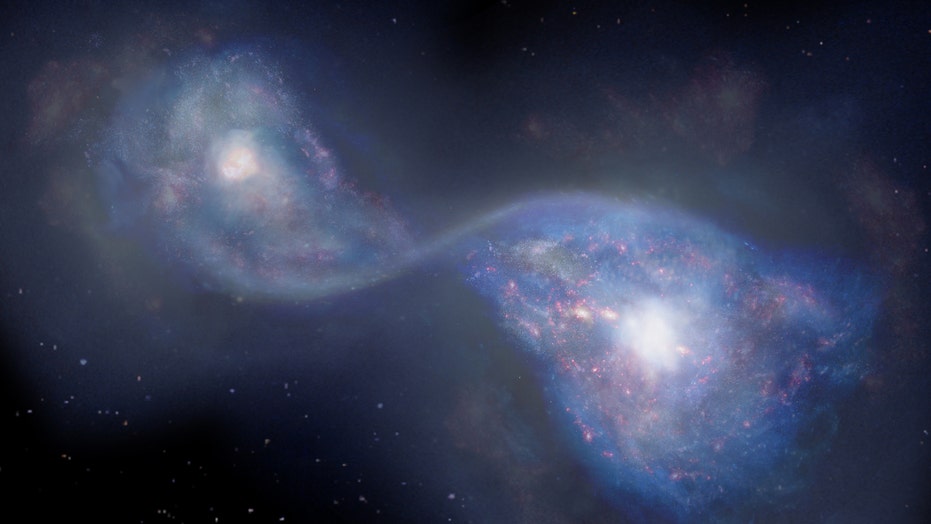 Scientists have located one of the most distant examples of merging galaxies in results that were published this week.

Researchers in Japan observed a distant source of light known as B14-65666, located in the constellation known as Sextans, using the Atacama Large Millimeter/submillimeter Array of telescopes in Chile.

Their data suggested that the object could be a single galaxy forming new stars as the result of a collision in space.

Prior observations with the Hubble Space Telescope had revealed two star clusters in B14-65666.

An artist’s impression of merging galaxies known as B14-65666 some 13 billion light-years away.  (National Astronomical Observatory of Japan)

Takuya Hashimoto, a postdoctoral researcher at the Japan Society for the Promotion of Science and Waseda University, Japan, explained that the signals received from the constellation had to travel 13 billion light-years to reach them.

“Detection of radio waves from three components in such a distant object clearly demonstrates ALMA’s high capability to investigate the distant universe," Hashimoto said in a press release.

Scientists will continue to use this type of research to explore the origins of our universe.

“The very early universe seems like a very exciting time to be a galaxy, with lots of violent collision and nothing that looks like the ordered structures we’re used to at later times,” Dan Marrone, associate professor at the University of Arizona, told Gizmodo.