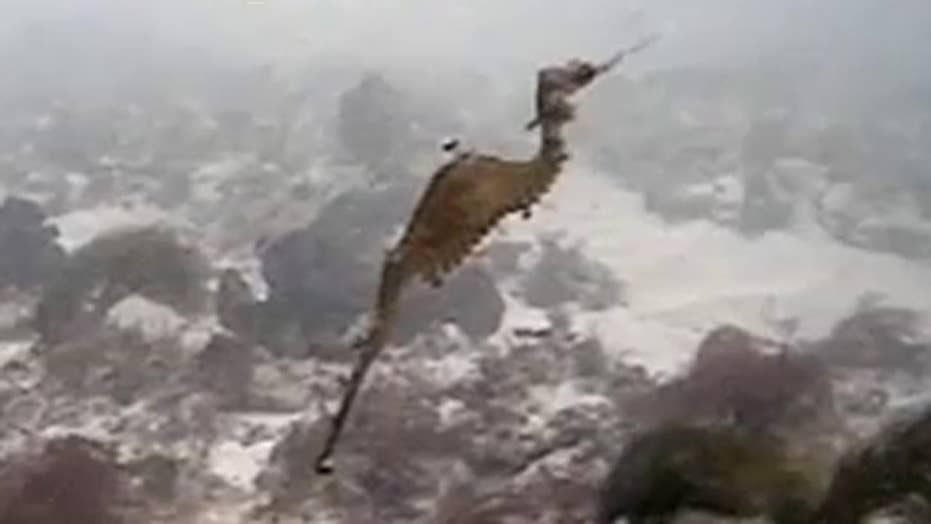 First-ever glimpse of ruby seadragon in the wild

Here be dragons. And more than anyone ever knew existed.

Researchers at the Scripps Institution of Oceanography at the University of California San Diego and the Western Australian Museum have confirmed the existence of a previously unknown third species of seadragon — the ruby seadragon, aka Phyllopteryx dewysea.

It’s a relative of the well-known leafy seadragon (Phycodurus eques) and common seadragon (Phyllopteryx taeniolatus), both of which are found off the southern and western coasts of Australia.

COWS AS BIG AS ELEPHANTS MAY SOON ROAM EUROPE

But before 2015, their ruby cousin wasn’t known to exist, thanks to its habitat — deeper than recreational SCUBA diving limits — and its close resemblance to the common seadragon.

Researchers began to suspect a third species existed when they examined preserved specimens of what were believed to be common seadragons. Now, thanks to remotely operated underwater cameras, their suspicions have been confirmed.

The ruby seadragon lacks the elaborate appendages its relatives use for camouflage (“It never occurred to me that a sea dragon could lack appendages, because they are characterized by their beautiful camouflage leaves,” said marine biologist Josefin Stiller, a Scripps graduate student, in a statement).

And it has a curled tail similar to that of its more distant cousins, seahorses and pipefish.

Researchers believe the ruby seadragon lost its appendages through evolution, and that its red color provides camouflage in deep waters, Scripps researchers reported. It’s unknown whether it developed its curly tail through evolution, or if the other two species lost theirs.

The 30 minutes of video the scientists recorded show the ruby seadragon striking at prey, like other seadragons. Its habitat is dominated by sponges, which had been thought to be undesirable for seadragons.

THE BALD AND THE BOLD: EAGLES' RESURGENCE COMES AT A PRICE

“There are so many discoveries still awaiting us in southern Australia,” said Nerida Wilson of the Western Australian Museum. “Western Australia has such a diverse range of habitats, and each one is deserving of attention.”

The research team is recommending that the ruby seadragon be declared a protected species as soon as possible.

The scientists’ research was published in the journal Marine Biodiversity Records.