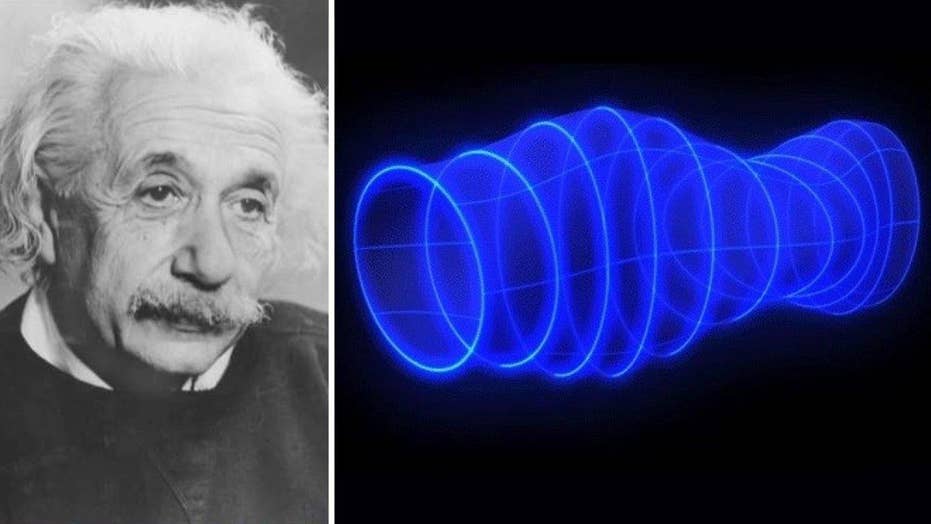 After decades of searching, scientists announced Thursday that they have detected gravitational waves -- essentially ripples in the fabric of space-time -- that had been predicted by Einstein.

An international team of astrophysicists said that they detected the waves from the distant crash of two black holes, using a $1.1 billion instrument. The Ligo Collaboration was behind the discovery and it has been accepted for publication in the journal Physical Review Letters.

A technician works on one of LIGO's optics. At each observatory, the 2 1/2-mile long L-shaped LIGO interferometer uses laser light split into two beams that travel back and forth down the arms. The beams are used to monitor the distance between mirrors precisely positioned at the ends of the arms. According to Einstein's theory, the distance between the mirrors will change when a gravitational wave passed by the detector. (LIGO Laboratory)

“Our observation of gravitational waves accomplishes an ambitious goal set out over five decades ago to directly detect this elusive phenomenon and better understand the universe, and, fittingly, fulfills Einstein’s legacy on the 100th anniversary of his general theory of relativity,” Reitze said in a statement.

The news, according to the Associated Press, is being compared by at least one theorist to Galileo taking up a telescope and looking at the planets and the biggest discovery since the discovery of the Higgs particle. It has stunned the world of physics and astronomy, prompting scientists to say it is the beginning of a new era in physics that could lead to scores more astrophysical discoveries and the exploration of the
warped side of the universe.

“Every year I tell my Gravity class about the three classics successes of General Relativity: the perihelion precession of Mercury, light bending and gravitational redshift. Next year, I’ll be adding a fourth: gravitational waves,” Tony Padilla, Royal
Society University Research Fellow in the School of Physics & Astronomy at the University of Nottingham, said in a statement.

It's real. Gravitational waves have been detected. Our understanding of the universe takes a giant leap forward. #LIGO

“Their detection is a stunning triumph for experiment, for theory, and most notably, for Einstein. And the source of these waves is rumored to be a merger of two black holes.  Wow! Just wow!  Black holes really exist," he said. "No more arguments. Looking further ahead we can look forward to a whole new era for astronomy, listening out for these remarkable signals that will teach us so much about the fundamental nature of gravity and the Universe. It’s almost as if we have grown a new set of ears, and there could be so much to hear!”

An aerial view of the Laser Interferometer Gravitational-wave Observatory (LIGO) detector in Livingston, Louisiana. LIGO has two detectors: one in Livingston and the other in Hanaford, Washington. LIGO is funded by NSF; Caltech and MIT conceived, built and operate the laboratories. (LIGO Laboratory)

The discovery confirms a major prediction of Albert Einstein’s 1915 general theory of relativity. Gravitation waves carry information about their dramatic origins and about the nature of gravity that cannot be obtained from elsewhere.

Not only have they fascinated scientists, but found their way into pop culture -- namely through movies such as "Back to the Future," where the space-time continuum was used as a medium for the DeLorean time machine to go back in time. It also was featured in the "Terminator" series.

Their existence was first demonstrated in the 1970s and 1980s by Joseph Taylor, Jr., and colleagues. In 1974, Taylor and Russell Hulse discovered a binary system composed of a pulsar in orbit around a neutron star. Taylor and Joel M. Weisberg in 1982 found that the orbit of the pulsar was slowly shrinking over time because of the release of energy in the form of gravitational waves. For discovering the pulsar and showing that it would make possible this particular gravitational wave measurement, Hulse and Taylor were awarded the 1993 Nobel Prize in Physics.

In the latest breakthrough, the gravitational waves were detected on Sept. 14, 2015, by both of the twin Laser Interferometer Gravitational-wave Observatory (LIGO) detectors, located in Livingston, La., and Hanford, Wash.

Based on the observed signals, LIGO scientists estimate that the black holes for this event were about 29 and 36 times the mass of the sun, and the event took place 1.3 billion years ago. About three times the mass of the Sun was converted into gravitational waves in a fraction of a second -- with a peak power output about 50 times that of the whole visible universe.

By looking at the time of arrival of the signals -- the detector in Livingston recorded the event 7 milliseconds before the detector in Hanford -- scientists can say that the source was located in the Southern Hemisphere.

Related: New star puts on a show in stunning image

According to general relativity, a pair of black holes orbiting around each other lose energy through the emission of gravitational waves, causing them to gradually approach each other over billions of years, and then much more quickly in the final minutes. In a final fraction of a second, the two black holes collide and form one massive black hole. A portion of their combined mass is converted to energy, according to Einstein’s formula E=mc2, and this energy is emitted as a final strong burst of gravitational waves.

These are the gravitational waves that LIGO observed.

“With this discovery, we humans are embarking on a marvelous new quest: the quest to explore the warped side of the universe -- objects and phenomena that are made from warped spacetime. Colliding black holes and gravitational waves are our first beautiful examples,” Caltech's Kip Thorne said.

Others, like David Clements, an astrophysicist at Imperial College London, said the discovery gives the world "a whole new tool with which to look at the universe, allowing us to look at some of the most energetic events imaginable -- collisions of black holes and neutron stars -- in ways that just were not possible before. We now have a whole new spectrum of radiation with which to study the universe.

“It’s as if we were blind and today LIGO has opened our eyes,” he said in a statement.