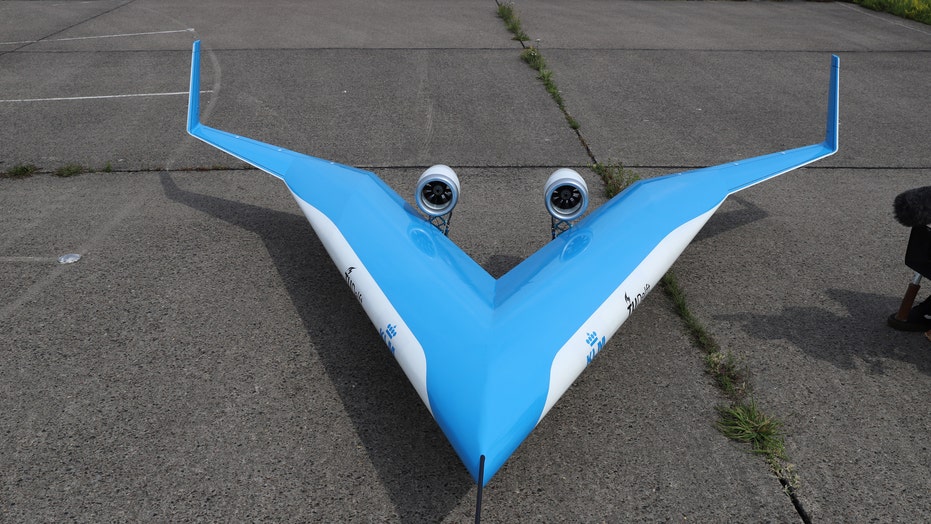 A scale model of a futuristic "Flying V" aircraft has made a successful maiden flight in Germany.

Delft University of Technology in Holland is spearheading the project, which is backed by Dutch airline KLM. Aircraft manufacturer Airbus is also involved in the project.

The project’s goal is to create a highly energy-efficient long-distance aircraft. The design integrates the passenger cabin, cargo hold and fuel tanks into the wings, creating a futuristic V-shape. Computer calculations predict that the “Flying-V’s” aerodynamic shape and reduced weight will reduce fuel consumption by 20% in comparison with the most advanced aircraft today, according to the university.

“This summer, a team of researchers, engineers and a drone pilot of TU Delft traveled to an airbase in Germany for the first real test flight of the scaled flight model of the energy-efficient aircraft design called the Flying-V,” explained Delft University of Technology in a statement. “After a period of extensive wind tunnel testing and a series of ground tests in the Netherlands, it was time to perform the first flight and obtain an impression of the flight characteristics.”

The tests of the model, which weighs 49.6 pounds and is 9.8-feet wide, were successful, according to the researchers.

“One of our worries was that the aircraft might have some difficulty lifting off, since previous calculations had shown that ‘rotation’ could be an issue,” project leader Dr. Roelof Vos of TU Delft, added in the statement. “The team optimized the scaled flight model to prevent the issue but the proof of the pudding is in the eating. You need to fly to know for sure.”

The researchers reported that rotation at takeoff was performed easily and occurred at a speed of 80 km/h (49.7 mph). “The plane’s thrust was good and flight speeds and angles were as predicted,” they said in the statement.

The flight test was conducted at an airbase in Germany. (Joep van Oppen/TU Delft)

However, the tests showed that the design causes too much “Dutch roll,” a type of aircraft motion that resulted in a slightly rough landing for the model.

“A next step for the team is to use the data collected during the flight for an aerodynamic (software) model of the aircraft," the researchers said. "This will make it possible to program it in a flight simulator to be used in future research, while further improving the flight characteristics.”

More tests with the scale model will also take place.

“The partners are working together on a research plan to fine-tune the concept,” said TU Delft, in the statement. “Next step: providing the Flying-V with sustainable propulsion, taking into account that the design seems highly suitable to carry liquid hydrogen instead of kerosene.”

Last year, in a separate project, Airbus revealed an airliner concept design that bears a striking resemblance to a "bird of prey.”

The concept design was launched at The Royal International Air Tattoo event at RAF Fairford in England.