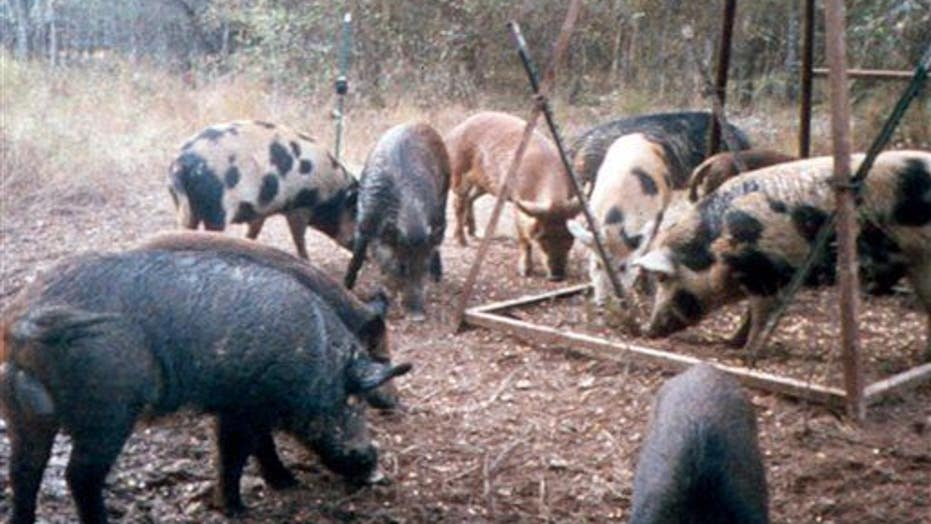 The U.S. wild pig population is soaring and rapidly multiplying, which experts describe as a ticking 'feral swine bomb,' according to a report on Saturday.

There are roughly nine million feral swine running rampant across the U.S. The invasive species already costs the U.S. an estimated $2.5 billion each year in damages and control costs, according to the U.S. Department of Agriculture (USDA). As their numbers continue to rise, the damage will only get worse.

In fact, the wild pig population has expanded from 17 states to at least 39 over the last three decades, The Atlantic reported.

“I’ve heard it referred to as a feral swine bomb,” says Dale Nolte, manager of the National Feral Swine Damage Management Program at the USDA. “They multiply so rapidly. To go from a thousand to two thousand, it’s not a big deal. But if you’ve got a million, it doesn’t take long to get to 4 [million], then 8 million.”

Ryan Brook, a University of Saskatchewan biologist who researches wild pigs says that most of them are a mixture of domestic breeds and European wild boar.

“The problem with the hybrids is you get all of the massive benefits of all of that genetics,” Brook told the paper. “It creates what we’d call super-pigs.”

Like something out of the 2017 film Okja, which involved a company manufacturing a special kind of “super pig,” he says the actual real-life wild hybrid "super-pigs" are intelligent and have a very good sense of smell. They also gain physical attributes from boars -- like heavy fur -- which increase their ability to survive in the wild.

In addition to boars, the hybrids gain benefits from domestic pigs, which are bred to be fertile year-round and to have large litters -- an average of 10 piglets in each, The Atlantic reported.

“Pig populations are completely out of control,” Brook said of their expansion in North America, according to the paper. “The efforts to deal with them are about one percent of what’s currently needed.”

The feral swine cause major damage to property, crops, livestock, native species and ecosystems, and cultural and historic resources, the USDA's website says. They also threaten the health of "people, wildlife, pets, and other domestic animals."

"As feral swine populations continue to expand across the country, these damages, costs, and risks will only keep rising," the USDA added.