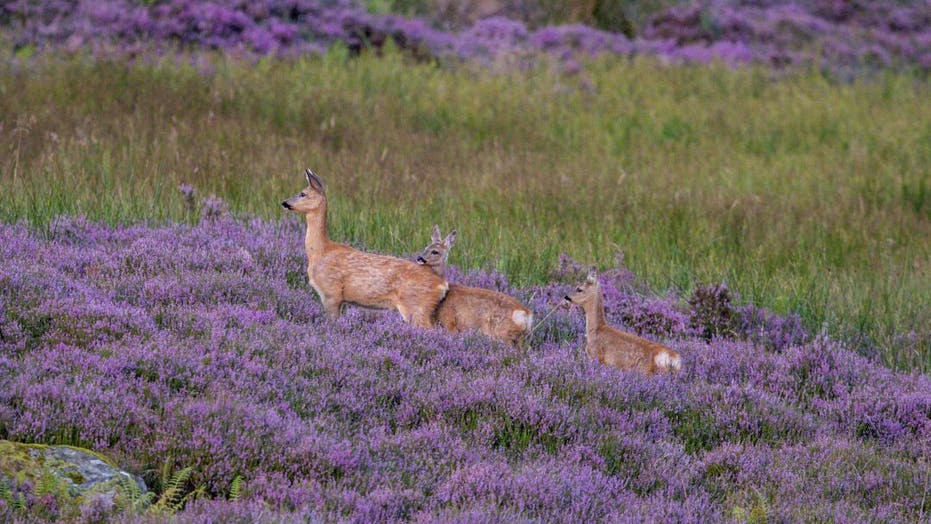 It's something out of a Disney movie.

A wildlife photographer captured an image of two "real-life Bambis" in a field of heather in Scotland, British news agency SWNS reports.

Paul Masterton, who hails from Edinburgh, captured the image of the majestic mammals in Glen Quaich, Perthshire. The 59-year-old father of three usually gets up early and heads to Glen Quaich to take photos of local wildlife, but this shot managed to surprise him.

This glorious photo shows a female deer with her two fawns in a field of heather at first light in Glen Quaich, Perthshire. (Credit: SWNS)

DEER WITH THREE ANTLERS CAUGHT ON CAMERA IN MICHIGAN

"I often go up there to enjoy wildlife [and] we got up at 4 a.m. and try to be there for first light as it's the best time to spot wildlife," Masterton, 59, said. "The heather is blooming right now, we have not seen any deer there before. There was a mum roe deer and two little ones, like real-life Bambis."

Heather, which was "like a purple carpet," according to Masterton, are small shrubs of flowers that grow in rocky areas.

Commonly found in Scotland, it often comes in pink or white, but can grow in different colors, including a pale shade of blue and purple mixed with grey.

"It was very peaceful; it was only me and a friend in the car," Masterton added. "The three of them were looking to the left, I think they spotted a stag coming, then they bolted away. They must have thought the stag was coming to harm them. It is like a real-life Bambi."