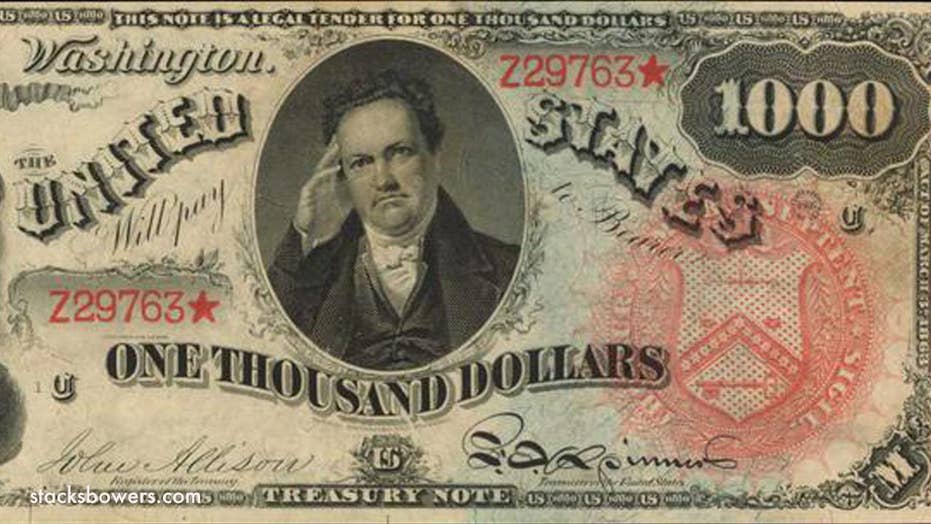 Rarest, most valuable US paper bills in existence set for multimillion dollar auction

Rare 19th century U.S. currency notes are heading to auction next week and are expected to sell for a combined $7 million.

Three exceedingly rare 19th century U.S. currency notes are expected to sell for a combined $7 million when they are auctioned off next week.

One of the unique bills being auctioned is a $1,000 "Rainbow" note from 1869 that's said to be the only one of its kind in private hands, according to Stack's Bowers Galleries. It was last auctioned in 1946 and features a portrait of DeWitt Clinton, who oversaw the construction of the Erie Canal during his tenure as the sixth governor of New York.

The auction includes another "Rainbow" note in the $500 denomination that depicts President John Quincy Adams on one side and the allegorical figure of Justice — holding balance scales and an upward pointing sword — on the left-hand side. According to the auction house, only 89,360 examples of this bill were printed and today only three are known to exist.

The unusual bills include a famous 1891 "Marcy Note" — a $1,000 bill featuring a portrait of former New York Gov. William L. Marcy that's believed to be the only one of its kind in private hands, according to Stack's Bowers Galleries. The note is expected to fetch between $2 and $3 million.

Another rare $1,000 bill that was dubbed the "Holy Grail of paper money" sold for $2 million at auction in October.